The leadership of the All Progressives Congress in South West Saturday night, failed to announce a consensus candidate as directed by the President , Muhammadu Buhari . 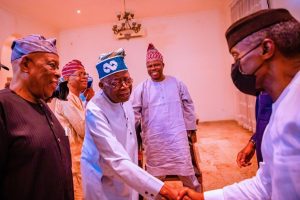 The South West leaders  held another meeting shortly after the president had held a meeting with the presidential aspirants in Abuja .

The conveners of the South west meeting were the two former governors of Osun and Ogun states , Chief Bisi Akande and Aremo Segun Osoba respectively .

PLATFORM TIMES relaibly gathered that the tension-soaked atmosphere became relaxed after the president ended the meeting without imposing any of the aspirants on the party .

It was further gathered that the expectations from some loyalists of the aspirants were dashed following the refusal of the president to name an annointed candidate .

Further findings showed that Buhari decided to toe he line so as to avoid heating up the polity .

At the South West Meeting which had all the aspirants, governors and the party leaders from the regions in attendance also failed to agree on who to choose as the party flag bearer .

A source at the meeting hinted PLATFORM TIMES that the leaders lauded the president and some northern governors for ceding the allowed the aspirants to express the ticket to the south .

The leaders reportedly sought the opinion of the aspirants on the modules operandi on how to produce consensus candidate ahead of the Monday primary .

The meeting however ended without achieving the consensus arrangement 24 hours to the primary .

Sensitive Election Materials No Longer To Be Kept With CBN,Says INEC