Fake news spreading in the media has it that Vice President, Yemi Osinbajo’s car somersaulted along the airport road this morning in Abuja.

The information as published by a news media is FALSE.

According to the the the vice President’s spokesman, Laolu Akande, the VP assisted victims of a road accident he encountered while on his way to Ondo.

Osinbajo is on his way to the scene of yesterday’s gory massacre in Owo, Ondo state.

Akande said in a tweet, “On his way to the airport this morning, VP came across a road traffic accident and ensured victim was taken to the hospital with VP’s convoy ambulance. He then proceeded on his trip and is now in Ondo State heading to site of yesterday’s attack in Owo.” 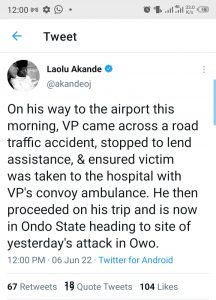 The Federal Road Safety Corps (FRSC) has also debunked the VP being involved in an accident.

Corps Public Education Officer, Bisi Kazeem disclosed in an interview with journalists that an accident involving a Toyota Corola happened at Zamani junction in Abuja.

While commending the Vice President for his intervention, Kazeem added that no one died but one person was injured and the VP has ordered treatment on his account.

Meanwhile the news which has since been deleted from the website of the organization is still making rounds on different platforms.

The President Muhammadu Buhari had on Sunday in a statement through his spokesman, Femi Adesina rained curses on terrorists who attacked the St. Francis Catholic Church, Owo, Ondo State.

No fewer than 50 persons had been reported dead from the terrorist attack which occurred during a mass service.

Insecurity Will End Before End Of 2022 – Buhari Vows