A governorship aspirant of the Labour Party in Ogun State, Kehinde Sogunle said the party is ready to lead ballot revolution in the state come 2023 election. 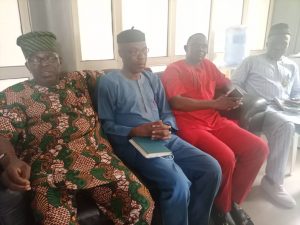 Sogunle, a former commisioner of finance during the Otunba Gbenga Daniel administration, who spoke on Thursday during the party’s governorship primary election in Abeokuta, said the party stands for good governance and not money politics.

PLATFORM TIMES reports that Sogunle declared emerged by affirmation of 100 delegates from the 20 local governments in the state who were present at the election primary.

In his speech, Sogunle vowed to bring about changes in the social, economic and political activities in the state.

He said, “I humbly accept this call for servant leadership and this challenge of operating in the blue ocean, to lead a ballot revolution that will stimulate a productive, positive, sustainable change and an accelerated and real landmark development.

“We are not money bags, we are fantastic idea bags and since ideas rule the world, we are set to serve Ogun State.

“We will utilize our profile and credibility to attract local and global private and multilateral capital to build and maintain functional and critical enabling infrastructure, as well as impactful social interventions.

“We will address the critical needs of workers and pensioners through a robust policy engagement and involvement of the unions, so that ‘the labour of our hero’s past and present shall never be in vain’!

“We will encourage the teeming youths by promoting creativity, employability, innovation, and
entrepreneurship to stimulate a quantum leap of an independent non-oil based CSEAT economy, focusing on the robust and lucrative value chains of Construction, Sports, Entertainment, Agriculture and Technology that would create a cohesive, cooperative, inclusive and happy life for all and sundry.”

The current Coordinator of the Catholic Social Forum of the Lagos
Province of Lagos Archdiocese, Abeokuta and Ijebu Ode also nominated Dr. Aishat Keshinro as his running mate.

Keshinro, a Medical Doctor was Former President of the Federation of Muslim Women Association of Nigeria (FOMWAN), Ogun State).

The LP candidate will contend with the incumbent Governor, Dapo Abiodun (APC), former law maker in the National Assembly, Oladipupo Adebutu (PDP), a business man, Ezekiel Fayoyin (NNPP) among others.