No one has served Ogun like I did except Obasanjo – Amosun

Former Presidential aspirant under the All Progressives Congress (APC) platform, Senator Ibikunle Amosun has said that no politician in Ogun State has served the state more than he did.

The former governor of Ogun state however made exception for former President Olusegun Obasanjo.

Amosun, who was a senator  in the fifth assembly is currently serving on second term in the ninth assembly.

Addressing his supporters at a welcome party organized at the Arcade ground of the Ake palace, Abeokuta, Amosun challenged anyone who has served the state from 1999 as long as he did to come out. 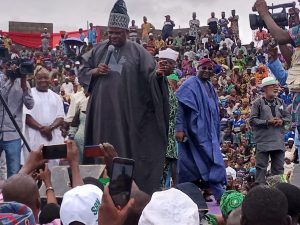 The lawmaker who said he had served the state for 15 years however acknowledged elders on whose shoulders he had stood.

“In this Ogun State, since 1999, I am on camera, except for Baba Olusegun Obasanjo, I am not talking of pre-1999, no human being, dead or alive has served Ogun State the way I have served. I have done 8 years as your governor, by next year it will be my 8th year in the Senate. Just between 1999 and now, I have served Ogun State with 15 years of my lifetime.

“Let anybody that have done that come out, I am not talking of our referred fathers. I accept that there are so many giants that came before me, we stood on their shoulders and we are still standing on their shoulders, but truth must be told and we must say it. Since 1999, Ibikunle Amosun has paid his dues in Ogun State and I still paying it. Put your mind at rest, we are APC, APC is ours. 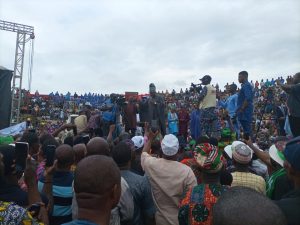 Amosun while appreciating his supporters appealed that they extend the support he has received so far to the APC Presidential candidate, Asiwaju Bola Ahmed Tinubu.