The Ogun State government has said it will vaccinate 1,072,615 and 5,363,076 of its citizens for measles and yellow fever respectively.

This is coming just as the World Health Organization planned to vaccinate 8.8 million Nigerians in May against yellow fever through its Eliminate Yellow Fever Campaign.

In a letter addressed to the public by the Commissioner for Health, Dr. Tomi Coker, the state government is partnering with the National Primary Health Care Development Agency on the vaccination for the exercise which had begun on Friday 17th of June and is expected to end 8th of July.

Coker while calling for supports on the child survival activities said that the vaccination is to reduce morbidity and mortality from measles and yellow fever diseases in the state.

She added that children between 9 and 59 months are targets for measles vaccination while people from 9 months to 44 years are targeted for yellow fever across the 20 local governments in the state for free.

“This exercise will involve the use of government health facilities, temporary fixed posts such as schools, (both public and private), mosques, churches, motor parks, markets industries, hard-to-reach communities and so on but not house-to-house. Therefore, health workers will be at various designation listed above across the state to vaccinate eligible public with measles and yellow fever vaccines free of charge.” 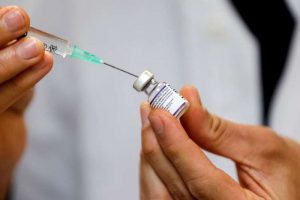 The State Health Educator, Primary HCDA Board, Elegbede Waheed speaking to our correspondent on the first day of the vaccination in Abeokuta disclose that the mandate is to have 1,072,615 vaccinated for measles and 5,363,076 for yellow fever.

“Today is day one, the acceptability rate from the people is massive and impressive.” he said.

Measles disease is an acute, highly infectious disease of the family Paramyxoviridae. Though 85% of children globally received one dose of measles vaccine by their first birthday in 2014, measles remains a leading cause of death in children.

According to the 2013 Nigeria Demographic and Health Survey, 25% of Nigerian children 12 to 23 months had received all recommended vaccines while measles vaccination coverage was 42%2. The Southern parts of the country had higher measles coverage (62%-74%) compared with the Northern regions (22%-48%) 2.

According to the NCDC status report in January, Ogun recorded 18 suspected cases, 4 of which were positive, 75.0% were confirmed cases in children aged 9-59 months.

Yellow fever is an acute viral hemorrhagic illness caused by the yellow fever virus. The virus is found in tropical and subtropical areas of Africa and Central/South America with the illness being endemic in 34 African countries (including Nigeria) and 13 Central and South American countries.

Yellow fever remains a disease of significant public health importance despite the availability of a safe and efficacious vaccine, with an estimated 200,000 cases and 30,000 deaths annually globally. The earliest outbreak of yellow fever in Nigeria was reported in Lagos in 1864, with subsequent regular outbreaks reported until 1996. For 21 years, no further confirmed cases were reported until September 2017, following which Nigeria has been responding to successive outbreaks. Yellow fever is an epidemic prone disease for immediate notification on the Integrated Disease Surveillance and Response (IDSR) platform in Nigeria.

As at December 2021, Ogun had 43 suspected yellow fever cases.