Family members of the late Balogun Sanni Fadeyi, in Obafemi/ Owode Local Government Area of Ogun State, have accused the Olu of Siun,
Oba Lawrence Odeyinka of masterminding the move to annex their village, Oba-Ayegbami. 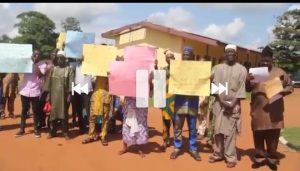 The family staged a peaceful protest on Monday over the alleged move to annex their village, Oba-Ayegbami.

The family maintained that Ayegbami Village, otherwise known as Abule Oba, was not located on Igbore land.

Speaking on behalf of the family, Mr. Saubana Fadeyi, Chief Kashimawo Ogubayo, and Mrs. Falilat Mobolaji Kareem spoke while presenting a petition to the Chairman of Obafemi Owode Local Government, Hon. Sina Ogunsola over the issue.

The family with their cousin from the Ajala family criticized Oba Odeyinka’s claim that the village was located on Igbore land.

They stated that their forebears who were from Oba and Imo Community sections of Egbaland are the rightful owners of the land.

“Our forefathers from Oba and Imo sections of Egbaland are the rightful owners of the land.

“We appeal to the Chairman of Obafemi Owode Local Government, the state government, to intervene to avoid breakdown of law and order in the council area”.

Reacting, the Olu of Siun, Oba Lawrence Odeyinka faulted the claim, saying, “they are chasing shadows.”

The traditional ruler insisted that the land belongs to the Igbores, adding that both parties are claiming the land due to the Corporate Social responsibility of the company of their host community.

“Nobody is annexing any land. The land has been allotted to a company and the family land owners have been paid.

“I contend that the land of the subject matter belongs to Igbore Township and not Imo Township which is laying claim to it.

“We are both laying claim to the land because of the CORPORATE SOCIAL RESPONSIBILITY (CSR) of the company to their host community.

“How can I annex land that has been sold? They are chasing shadows.” Said Oba Odeyinka