No fewer than five journalists were beaten and harassed by overzealous union members who were ensuring compliance to the strike order in Ogun State.

The journalists who were monitoring the compliance and situation across state government establishments met hostile resistance at the Ogun State General Hospital in Ijaiye.

The Union members who came in company of the Ogun State Chapter of the Medical and Health workers Union of Nigeria, were seen with NULGE caps and shirts while some others were on mufti at the entrance of the hospital. 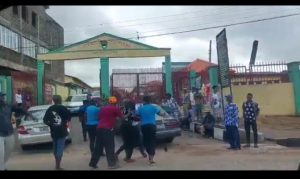 The union members armed with canes prevented Olatunji from taking pictures. Other union members knew nothing about his presence launched blows and slaps from different corners.

“We were going around so as to send updates on the strike which started yesterday, I was just shocked at the aggression of these people at the State hospital. Despite showing the my ID, the union members whose attitude doesn’t show any level of literacy were just harassing me. Before I knew what was going on, I started receiving blows.

Another journalist who had arrived the scene earlier, Tutu Sobowale said she was taking pictures from the other side of the road when three accosted her.

“I didn’t even enter the hospital, I was still at the other side of the road when about four men carry canes came, dragged me into the hospital. They were asking who gave me permission to snap. My phone was seized, I was detained and queried for hours. My offense was that I am taking pictures without permission, they even said that I am looking for fake news. I had a little fracture on my arm while they dragged me. It took a while before I was able to retrieve my phone.”

The Medical Director of the Ogun State hospital Ijaiye, Dr. Bunmi Soinake expressed shock at the harassment of journalists.

Sonaike who came out to address the journalists after the fracas said that those who were involved in the violence were not members of the hospital community.

“When they came, we explained to them that this is a hospital and we cannot just shut down the emergency unit too. While you were here, you would have observed the accident victims that were brought in, we had to attend to them. We were still discussing why we can’t shut down the emergency unit when we heard of the Journalists that came initially. I corrected some of our staff that these journalists are out to do their job.

“I was more shocked when I heard of a journalist being beaten at the gate. Those involved are not our members here, they are union members who are to enforce compliance to the strike order, some of our workers were also also harassed,” Sonaike explained to journalists.

When contacted, the State chairman of the Nigerian Labour Congress, Emmanuel Bankole apologized to journalists who were harassed.

The affected journalists have since inform the Ogun State Chapter of the Nigerian Union of Journalists for further actions.

Meanwhile the Ogun State government is yet to comment on the strike 24 hours after it commenced.