Today, residents of Osun State will decide who will manage the affairs of the state for the next four years.

The election will be the second to be conducted by the Independent National Electoral Commission (INEC), since the beginning of the year.

The election will be contested in all the 30 local government areas, comprising 332 wards and 3,763 polling units.

A total of 15 candidates will participate in today’s process. They are the incumbent, Gboyega Oyetola of the All Progressives Congress (APC), who is seeking a second term in office; Ademola Adeleke, a former senator, who is the flag bearer of the main opposition, Peoples Democratic Party (PDP); and Yusuf Lasun, a former deputy speaker of the House of Representatives, who is the candidate of the Labour Party (LP).

INEC has assured transparency in the election, while security agencies have also assured safety of lives and properties during and after the election.

Civil Society Organizations have also urged security agencies to ensure they arrest and prosecute anybody found guilty of electoral fraud.

PLATFORM TIMES is live in Osun State to give updates on the election. Stay tune and enjoy our reports.

Voting is going on smoothly at Unit 4 , ward 4 of Ede South Local Government. venue of the pooling unit is Obaloye Grammar School, Ede.

Men were on a separate queue while women also maintained another queue.

Security agencies were stationed in strategic places in the polling unit.

Mr Ademola Adeleke, candidate of the Peoples Democratic Party has just cast his vote at his polling unit at Ward 2 , Unit 9 of Ede North Local Government.

Mr Adeleke has casted his votes and left for his residence in Ede.

PlatformTimes gathered that the total number of accredited voters at the polling unit is 732.

According to the database of INEC, Ede North has a total number of 71,750 registered voters.

Security agencies have been stationed at strategic places within the local government. 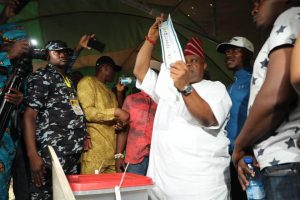 Mr Ademola Adeleke, candidate of the Peoples Democratic Party while casting his vote at Ward 2, Unit 9 of Ede North

At exactly 8:29 am , voting commenced in Unit 10, ward 4 of Ede South Local Government.

The total number of accredited voters is 1706.

While some were checking and confirming their names , many others are trooping in to cast their votes.

Ademola Adeleke, candidate of the Peoples Democratic Party said decision of the people in today’s election will determine how popular he is in the state.

One of the Ad-hoc staff of the Independent National Electoral Commission (INEC) who refused to disclose his name said, total number of accredited voters at the polling unit is 732.

According to the database of INEC, Ede North has a total number of 71,750 registered voters.

Mr Adeleke spoke shortly after he performed his civil duty at his polling unit in Ward 2, Unit 9 of Ede North Local Government.

The PDP candidate expressed satisfaction in the conduct of the election, describing the process as ‘very impressive’.

“So far so good, with all I am hearing, everything is still calm and we hope it is going to stay like that.I think INEC has improved in several ways. And I give them kudos. The turnout is very impressive.

“We are just starting, we are watching and I hope it is not going to be like that. But we want this election to be a point of contact for 2023. The whole world is watching us. It is going to be a test case for us. We should let Osun people decide who they want” Mr Adeleke said.

He expressed confidence that PDP will win the ongoing election.

“You can see me along my people and even after being elected, I will still be like a managerial person. They asked me to come”. Mr Adeleke added.

Mr Ogunbiyi has cast his vote while many other electorates are still waiting on a single long queue.

Voting commenced in the area around 8:10am with presence of security officers.

The counting is currently being done in different polling unit across the state and results are being announced immediately after the counting.

In the results, some of votes were void while many others followed the guidelines of the electoral commission.

See below, results from some of the polling units:

Mr Ademola Adeleke of the Peoples Democratic Party (PDP) won the election in one of the polling units in Ilesa West Local Government of Osun State, the area of Minister of Interior, Rauf Aregbesola.

At polling unit 05, ward 07 in Ilesa, officials of the Independent National Electoral Commission who counted results of the election in the polling unit declared that Mr Adeleke led with 47 votes.

Mr Adegboyega Oyetola of the All Progressives Congress (APC) had 17 votes.

PlatformTimes had reported that the Mr Aregbesola who hailed from Ilesa West boycott the guber election in the state he governed for eight years.

A total of 120 voters registered in the polling unit while 71 were accredited on the day of the election.

The total number of valid votes was 67 while four votes were voided. 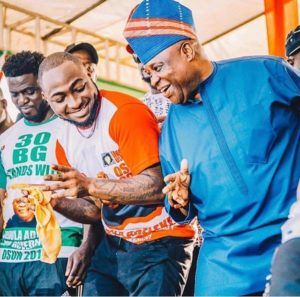 NANS: We’ll shut down Nigeria if ASUU strike is not called off