A former Governor of Ogun State, Gbenga Daniel, has appealed to the Federal Government to take over the state-owned Gateway Industrial and Petro-Gas Institute, Oni, OgunWaterside local government area of the state . 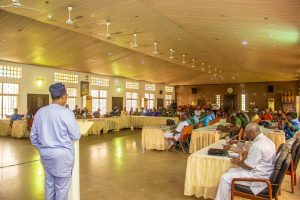 Daniel made the declaration in his remarks at a two-day Ogun East Senatorial District Interactive Forum held in Sagamu . 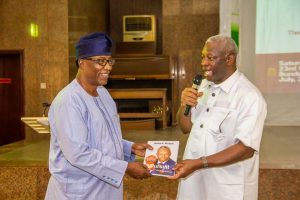 The former governor who governed the state for eight yaers between 2003 and 2011, claimed that “bad politics” was responsible for the failure of the state to assume oil-producing status.

He lamented that the Gateway State should have long become an oil-producing state , claiming that the economic development projects his administration envisioned for the state were deliberately stalled by his successor.

The workshop had no fewer than 120 participants, drawn from the nine local government areas of the senatorial district, organised by the Gateway Movement in collaboration with the Political Leadership Academy.

He said “by now, Ogun State should have been declared an oil-producing state but because of bad politics.

“Many of you who are politicians don’t have an understanding of what the game is all about; not everything can be said in the public domain.

“Our future and the future of our children is what we are talking about. There are great potentials in Ogun State. There is oil here but some people don’t want us to be declared as an oil-producing. They are a lot. So, if we are able to break loose these shackles, we will be in a position to reposition our area.”

Daniel, who is the All Progressives Congress (APC) senatorial candidate for Ogun East in 2023 elections, said his agenda, if elected, is to restore the pride and confidence of Ijebu and Remo people.

He decried the dwindling fortunes of the senatorial district, which, according to him, is lacking in viable industries.

His words: “The biggest thing that we have to do is to restore the pride of our people and restore their confidence. Our people are fast losing their economic power.

“Apart from what we were able to do within the Sagamu Interchange axis, creating probably one of the biggest industrial estates, there is no industry in Ijebu side. Also, all the things that we envisioned and tried to do were deliberately not allowed to happen.”

On the Gateway Industrial and Petro-Gas Institute, which was established by his administration in Oni, Ogun Waterside Local Government Area of the state, the former governor suggested the complete takeover of the school by the Federal Government.

He said such gesture would enable the institution to realise its potential and further boost the state’s quest for oil-producing status.

He added, “The Gateway Petrochemical that we put in Oni was to look after the Olokola initiatives by way of training of our people. I’m not so sure since I left if any governor has gone there. Part of what is in my manifesto is that the Federal Government should take over that institution. There is only one of its kind in Nigeria which is the Petrochemical institute in Effurun, Warri (Delta State).

“You ‘ll be shocked that the institution at Oni has capacity of underwater welding which means we can even do ship-building yard there.”

The workshop which spanned through Saturday July 23 and Sunday July 24, 2022, had as its theme: ‘Challenges and Opportunities in Ogun East Senatorial District.’

Seven resource persons made presentations at the event. Chief Pegba Otemolu, veteran political administrator, facilitated the session on ‘Electoral Law and Constitution on Nigeria’s Election Process’ while Professor Adegbemi Onakoya, distinguished academic, made presentations on ‘Fundamental Principle of Democracy and Good Governance’ as well as ‘Analysis of Opposition in Ogun State and Nigeria (Voters Identification, Canvassing and Monitoring).’

Also, Ms Damilola Otubanjo, a fashion enthusiast, engineer and politician, took the participants through a presentation on ‘Women in Politics’ and General Olumuyiwa Okunowo (retd) delivered a paper on ‘Security Challenges during Nigeria’s Elections.’

Russia to make further cuts in gas supply to EU

Elites Must Sacrifice For People’s Benefit,Osinbajo