…We know nothing about it -Alumni president

Residents of Grace land Estate, Idi-Aba,  in Abeokuta, Ogun State capital, on Tuesday, staged a peaceful protest over the alleged invasion and demolition of their property  by old students of Abeokuta Grammar School, Idi-Aba, who claimed to be the owner of the estate. 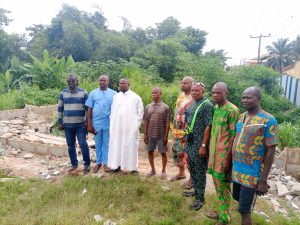 The old students under the auspices of Abeokuta Grammar School, Old Boys Association (AGSOBA) had recently claimed ownership of the Estate, accusing the residents of erecting structures illegally on their land.

The Bureau of Lands in Ogun State had also intervened in the dispute, declaring that a portion of the land belongs to the school while the other portion belongs to residents of the area.

The clarification by the bureau was said to have prompted the alumni association to drag the community to court in other to claim full ownership of the area.

While the matter is still in court, residents of the Estate constructed a perimeter fence on the portion that the Bureau of Lands marked as the beginning of their community to demarcate their Estate from the school building.

The aggrieved protesters on Tuesday led by Chairman of the Estate, Yemi Ogunsanya accused alumni of Abeokuta Grammar School of demolishing the constructed perimeter fence, which according to them was worth N1.5 million.

The protesters who besieged the entrance of the community called on the state government to stop the school’s alumni from invading their community.

“Abeokuta Grammar School constructed its own fence and we did not tamper with it but because of the insecurity in the country,  Boko Haram are breaking into communities and of course we are afraid, so we decided the construct our own fence to prevent illegal entry into our Estate.

“Before we woke up today, the fence we constructed with almost N1.5 million has been demolished and we suspected that the fence was demolished by alumni of Abeokuta Grammar School because we already have issues with them on the land” Ogunsanya said.

The Estate Chairman stressed that he has a document in his possession as evidence to prove the claim of ownership of the land.

“We have documents to prove that we are not invading their land but they are the ones invading ours. They do not have any documents to support their claims, they are just using mischievous attitude with the hope that they have powerful people, that they have influential personalities, that they have lawyers who are Senior Advocate of Nigeria and they are ready to fight for them to win the land. The case is still in court.

Ogunsanya explained that the Estate residents appropriately bought their lands from one Oyalowo family before erecting properties on it.

“We bought our lands from Oyalowo family, I did not know anything about the family that sold theirs to them. We want the government to intervene in this issue”.

Oduntan noted that the case is in court, expressing confidence that the Abeokuta Grammar School alumni would win the case and take over the land.

Davido back with Chioma after ‘split’