The Police Community Relations Committee has decorated TVC News correspondent in Ogun state, Kazeem Olowe and the incumbent Chairman of the Consolidated chapel of Nigerian Union of Journalists as the media icon of the year. 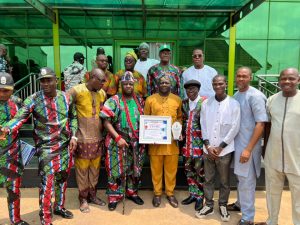 Olowe was decorated alongside other awardees at the PCRC week grand finale held on Saturday at Treasure Golden Hotel, Simawa, Ogun State.

Olowe in his acceptance speech stated that the award was a call to do more, particularly, to journalists who had worked with him together on the PCRC project in the past.

He disclosed that the award was dedicated to all journalists, tasking others to see security as everybody’s business.

He said “journalists should use the power of media to educate the general public on Security consciousness.

“Security is everybody’s business and we, as journalists, are seen as partners in progress. It is our duty to support stakeholders that we know that they are contributing to nation’s building, especially in protecting the lives and property of people.

“The award is a call to service for all journalists to do more and I know, we shall do our best to make our society better”.

The Consolidated chapel chairman called on other journalists who are yet to join the train to come on board and use the media tools in their hands to further secure the society and improve security consciousness among the people.

Olowe appreciated the leadership of the PCRC from the National Chairman Amb. Dr Faruk Maiyama, Vice Chairman in charge of Southwest, Alhaji Mogaji Ibrahim Olaniyan, the state Chairman, Arc (Dr) Samson Popoola and others members of PCRC in the state.

I would have had 12 children –Adeboye