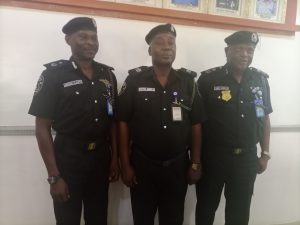 PLATFORM TIMES gathered that
Abimbola and the five other Senior Police Officers in the state- Obe Saibu, Bode Omotade, Kamorudeen Olabisi, Ayegbede John and Shifau Oluwatoyin were decorated with the new rank at the state police headquarters, Eleweran, Abeokuta . 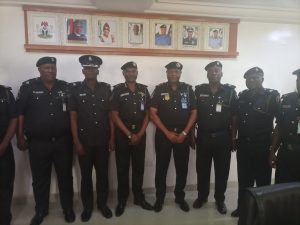 Decorating the new officers, the Commissioner of Police in the state, Lanre Bankole said the promotion of the senior officers was as a result of hardwork and due diligence exhibited by the officers.

Bankole said the recommendation by the Inspector General of Police, IGP Baba Alkali to the PSC was testament to the fact that, Nigeria Police reward hard work.

“I must say that the promotion of these officers which was done by Police Service Commission (PSC) upon the recommendation of Inspector-General of Police, IGP Alkali Baba is as a result of the dint of hard work that has been exhibited by these officers in the course of their duty.

“It intensify the fact that the Nigeria Police will continue to reward diligent. I will implore them to discharge their duty professionally and diligently. It is a further testimony to encourage and boost the moral of Officers. Definitely, their new rank will come with certain responsibility.”

Speaking on behalf of the newly promoted officers, SP Abimbola Oyeyemi thanked the Inspector General of Police for considering them worthy of the promotion.

Oyeyemi further pledged his loyalty and assured the IGP to carry out their duties diligently.

“On behalf of the promotees, we thank the IGP who graciously recommended us for the promotion and thank the Commissioner of Police and the management of Ogun State Police command for their support. We seized this opportunity to pledge our loyalty to the Nigeria Police and carry out our duties diligently.”