Traditional rulers in Ogun West Senatorial Districts of Ogun State, have thrown their weight behind the second term bid of Governor Dapo Abiodun over what they described as his outstanding performance in the last three years. 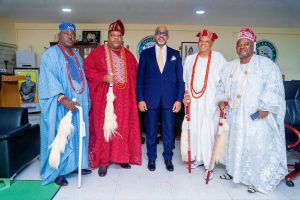 The monarchs, under the auspices of Trusted Royal Fathers also endorsed the Ogun West Senatorial ambition of Senator Olamilekan Adeola, popularly known as Yayi to represent the District at the Senate come 2023.

The traditional rulers described Governor Abiodun as not only a trusted, but also a reliable and competent leader.

Addressing journalists on behalf of 40 Monarchs, shortly after a meeting, held at Abepa place, Joga Orile on Monday, the Abepa, Oba Adekeye Adeyemi who is the Chairman said, they have unanimously backed Governor Abiodun to ‘carry go’ his good developmental works comes 2023.

Flanked by the Secretary of the group, the Onigbeji of Igbeji, Oba Sunday Adelakun, Abepa said, the royal fathers decided to support Governor Abiodun and Senator Adeola because of developmental projects and creditable performances in office.

They said they have endorsed Abiodun’s second term re-election bid to give the Governor the opportunity to complete his good works which he has embarked upon without unnecessary propaganda and undue favoritism of any section against the other.

The royal fathers argued that, the combination of Abiodun and Yayi would be perfect to facilitate more developmental projects for the benefits of Ogun State, particularly Ogun West.

“Yes, Abiodun deserves to carry on his good jobs to further better people’s lots and give more meaningful developments to Ogun State while Senator Adeola Yayi in other hands,would be a good representation in the upper house of Assembly for Ogun West Senatorial District whom without any doubt will use his constituency projects to develop Ogun West.

“We will give them all necessary supports as their royal fathers to ensure their coming back in 2023.It is our determination to ensure that Abiodun complete his two terms of office ‘eight years’ without any interuption likely to cause by political bitterness while Adeola become Senator representing Ogun West”. the royal fathers declared.

The Trusted Obas recalled meaningful projects embarked upon by Governor Abiodun to make Ogun State equal among others sayings, Abiodun has tried his best within the short period of 3 years and he must be supported to complete his works.

They commended Abiodun’s efforts on the construction of some notable roads such as: Atan-Lusada Agbara (Free Trade Zone), Epe- Ikorodu road, Ilisan-Agowoye road, ongoing construction of Ilaro/Owode road, Lanfenwa Rounder road and Pansheke – Adigbe-Opako road, among others across the State.

They also praised him for resourcitating the mass bus transit system, construction of housing estates and provision of adequate security through supports to the Police and Amotekun in the State thus, describing him as people friendly Governor..

They equally commended his investment on education and construction of the agro cargo airport embarked upon saying the project is capable of generating employment opportunity for the youths and as well serve as revenue generating avenue for the State.