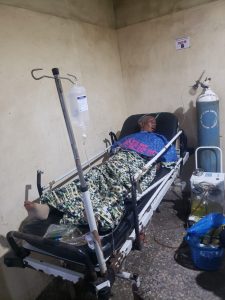 The couple also lost property including money and belongings to the gas explosion . 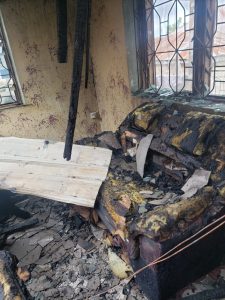 PLATFORM TIMES gathered that the man, Saula Ajayi, having lost his wife and property worth millions of naira to the gas explosion also lost a loan obtained from cooperative running into about one million naira . 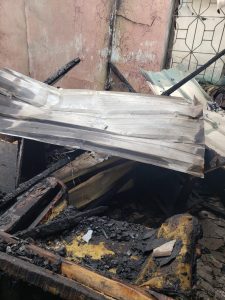 PLATFORM TIMES further gathered that the gas explosion occured on Friday from the apartment of one of the tenants and razed down a bungalow in Ijeja, Abeokuta

Ajayi, who was an occupant of the building whose wife died in the incident, said he lost the total sum of N850,000 to the fire outbreak.

“I had lost all my property which include two refregerators, television set, all my documents while I was in the Army, clothes and other belongings all got burnt.”

Ajayi disclosed that he was unable to take anything from home when the inferno started.

He added that the clothes he was putting on was given to him by a neighbour .

An eye witness, Kola Abolade told our corresponden that there was a fire outbreak on Friday at Ijeja, Abeokuta around 2:pm while a tenant was cooking with gas.

He added that an elderly woman lost her life on Monday in the hospital as she was unable to come back from coma due to the fire outbreak.

He said “the whole house was razed down. A particular elderly couple was badly affected.

“They lost about a million naira the Baba just collected from cooperative to the fire and all their belongings.

“In fact, the mama who was earlier in coma died yesterday (Monday, 29th August)!”

Attempts to get reaction from the state fire service failed as the director of fire service in the state , Fatai Adefala had not answered calls made to his phone .

When contacted ,the Police Public Relations Officer in the state , SP, Abimbola Oyeyemi said he had not been briefed about the incident .

Police To Abiola’s Widow : You Have Case To Answer Over Assault