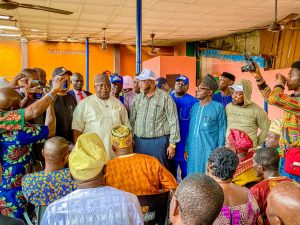 Adebutu gave the assurance on Thursday during his visit to the scene of a recent devastating explosion along Lambe-Matogun road in Ifo Local Government Area of the state.

A massive crowd thronged the area to warmly welcome the PDP standard bearer who sympathised with the victims.

In his remarks, Adebutu expressed dismay over the deplorable condition of roads in the area and restated his commitment addressing the infrastructural challenges confronting the residents.

He noted that there was a need to create a border development agency which will effectively handle boundary issues of each states.

Adebutu said, “The first thing they will do is delineation, to know the boundary of each state. When we establish that, it will be easy to know which one is our own. When we are able to do that, then we will be able to hold each government responsible.

“I was disgusted with the bad road in Lambe. I wonder, if this is truly Ogun State! I lived in Ogun State since 1991, I don’t have a house abroad, I am a farmer and I live in this country.

“This is not the time for campaign, I’m still coming back. I sympathise with you. I don’t have much to do because I have limited power, if I have government power, I know what to do.

“The government that is inhumane knows what it’s supposed to do. I am not in government today, I have limited power but the limited resources that I have today I’ll share it with you.

“We are talking about 19.5km road. I use my heritage as a witness, give me your support in 2023 and the 19.5km road will be constructed. I give you my word and my word is my bond.”

The Baale of Lambe, Engineer Adewole Johnson, noted that the boundary issue should not have been a problem if there was a dedicated and responsive government in place.

“In this explosion we are lucky that no life was lost. If you (Adebutu) are elected today I have confidence within me that all this issue will be a thing of the past,” he submitted.

In his remarks, the Otun Baale of Olambe Community, Aremo Akinola Ogunremi, appreciated Adebutu for sympathising with the victims and the entire people of the community.

“For the past 30 years, we have been suffering on this deplorable road. We are suffering a lot. From your far away location, you came here to sympathize with us, we appreciate you for that,” he said.

Ogun 2023: No One Is Sponsoring Me To Scuttle PDP Chances- Showunmi