A woman, Amoke Eweje has accused operatives of Amotekun Corps in Ogun state for allegedly shooting his son, Ayodeji Eweje and also tagging him a cultist. 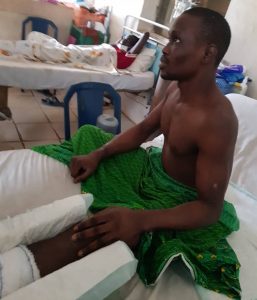 The distraught mother who cried out to the state government to help and save her only son, Ayodeji, from the operatives of the Amotekun corps, who she said shot him on May 24.

Eweje spoke with newsmen at the Federal Medical Centre, Abeokuta, where Ayodeji was being treated, calling for investigation into the whole scenario and help salvage the leg of her son from being amputated.

While speaking in his sick bed, the victim said the incident happened when he went to watch the Ogun State Governor, Dapo Abiodun, while commissioning the Adigbe-Panseke road in Abeokuta.

He said “I just returned from South Africa where I had gone to seek for greener pastures, but on getting to Abeokuta, I saw that the whole thing has changed, and I was excited with the transformation at my area in Adigbe, I decided to take a stroll that fateful day, and as fate would have it, it was the day the governor was commissioning the Panseke-Adigbe road

“I joined other onlookers at the overhead bridge at Panseke when the law enforcement officers told us to leave, I obeyed, but maybe the man thought I was not fast enough, he gripped me and handed me over to the Amotekun corps. After the event, rather than letting me go, the Amotekun men took me to their office at Oke-Ilewo without telling me what my offence was.

“It was in their custody that I was also taken to Imeko, in Imeko-Afon Local Government Area of Ogun State.”

Ayodeji said he did not know any particular reason why the Amotekun men shot him in the leg.

He said “what I can remember that was on a certain Sunday evening, I was told to come out and on getting out, an officer told me to climb into the roof for a certain repair of the office. While doing that, another one came and shot at me, alleging that I wanted to escape from custody.”

Ayodeji narrated further that he was kept in a dark room for about three months without being charged to court or handed over to the police.

He added that the corps did not allow him to inform his family of his whereabouts, not until recently.

In her words, Ayodeji’s mother of Ayodeji appealed to the state government to help in the payment for the treatment of the leg.

She told journalists that she had been searching her son since May 24 without any clue of where he was.

However, the woman said somebody who claimed to be calling from Amotekun office informed her that Ayodeji son was their custody, and needed help.

“It was around August that the person called, we quickly rushed to their office at Oke-Ilewo, but was told that nothing like that happened. We were told that Ayodeji was not with them.

“Again, a week later, the person called with another number, saying that we need to save my son or he may be tagged a cultist or kidnapper, and thereby get killed him. This time around, we were worried, we sought for assistance of a human right lawyer, who helped to petition the Commissioner of Police.

“It was through the police that we were able to know that truly, Ayodeji was with the Amotekun Corps, and was taken to their Imeko-Afon office for a reason known to them,” she stated.

Mrs Eweje added that the first time he set eyes on his son on the hospital bed, with his leg badly damaged, she cried bitterly.

According to her, the Amotekun Corps could not provide any answer when she asked why his son was treated this way without informing the family, the police or better still take the matter to court since May 24.

“Now, they have destroyed his leg, he could not walk again. They just abandoned him there at the Federal Medical Centre, Abeokuta without taking care of his hospital bills.

“The hospital is asking us to pay millions of Naira. The Amotekun is not paying a dime, the hospital also threatened to discharge him if by Tuesday if we don’t pay. I know why they are doing this to me, it’s because we are poor and has nobody to fight for us,” she said.

Reacting, the Ogun State Commander of the Amotekun Corps David Akinremi insisted that Ayodeji and his gang had been on the wanted list of the corps for a long time.

Akinremi, a retired Commissioner of Police said Ayodeji was a notorious cultist, who had been tormenting the Adigbe area of Abeokuta for a long time.

“We tried to profile him again, but in the process, he wanted to escape through the ceiling of the custody he was kept. It was then our personnel shot at his leg, and immediately we took him to hospital for treatment,” the Commander said.

He said the command had been responsible for the victim’s treatmentand would ensure that he is okay before he is taken to court.

Bandits Flogging My Wife, Holding My Newborn In Captivity, Man Cries Out

I ‘ll Do Better Than Awolowo, Put Food On Every Table – Ogun PRP Gov. Candidate

Bandits Flogging My Wife, Holding My Newborn In Captivity, Man Cries Out