On May 25, 2019, President Muhammadu Buhari was in Abeokuta, Ogun State capital, to inaugurate some projects of the former governor Ibikunle Amosun-led administration. The projects included an uncompleted 250-bedded specialist hospital.

The hospital was expected to serve as a specialist care center for the state, and provide a facility for premium private healthcare delivery and partnership with visiting regional and international medical teams to Ogun state.

Three years later, the hospital remained abandoned, while multi-billion naira equipment was left to rot. SODIQ OJUROUNGBE writes about the conditions of some general hospitals and how it is hindering good health care service delivery, while the multi-billion 250-bedded hospital rot away.

Modupeola Ayoade was rushed to the Itori general hospital in Ewekoro area of Ogun state on January 10, 2022, around 2 am when she was about to give birth. When her husband, Gbenga Ayoade rushed her to the general hospital, they met two nurses and a security guard on duty.

Ayoade said there was no electricity in the hospital, as they were asked to buy candles so that the hospital would not be in total darkness.

“The last time my wife went there for delivery, it was hell,” he said.

“Lack of proper management is also killing the hospital, look at the compound. It may interest you that patients buy candles for the hospital, meanwhile, the local government is just about five to seven minutes to the hospital.”

Ayoade, however, said he has to take his wife from the hospital the following day because of the poor condition of the hospital. He insisted that the hospital is becoming a mortuary instead of a health care center that can treat people. 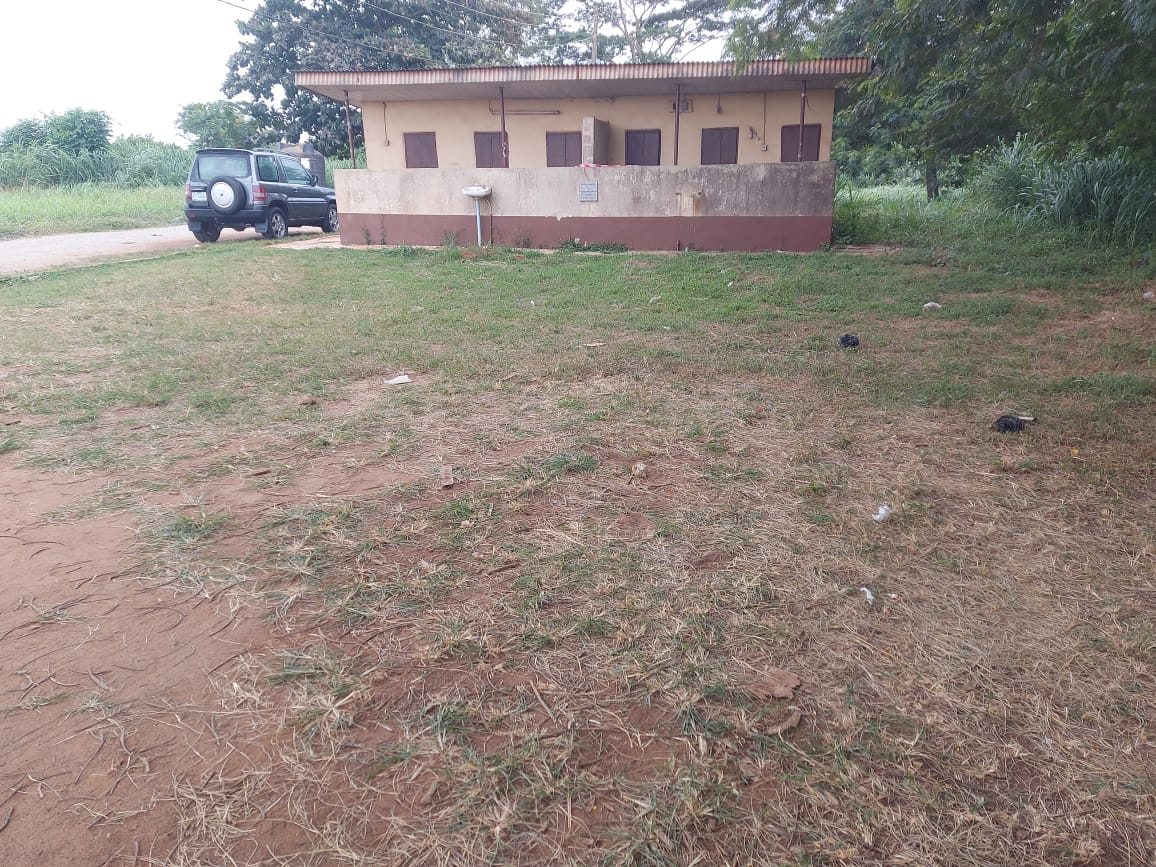 While Ayoade is lucky to have the financial strength to take his wife to a private hospital for further treatment, some were not financially buoyant to make such a decision.

Ayoade believes that if the general hospital is equipped with the necessary equipment and health workers, he will not have any reason to move his wife from the hospital to a private hospital.

Just like Ayoade, many have also argued that facilities at the abandoned 250-bedded hospital should be distributed to some of the general hospitals and primary health centers across the state so that people can have access to quality health care delivery. 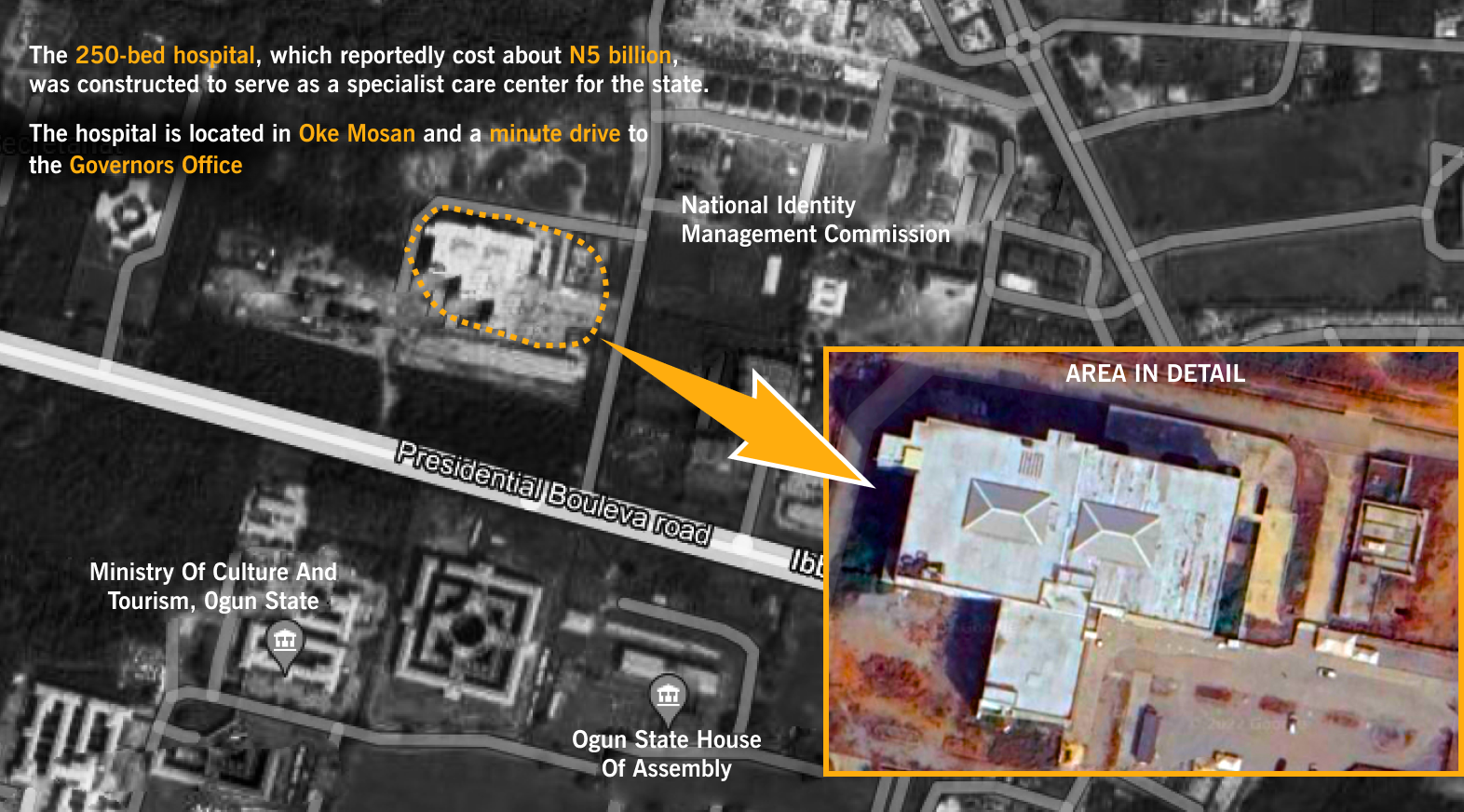 The 250-bed hospital, which reportedly cost about N5 billion, was constructed to serve as a specialist care center for the state.

The hospital is intended to provide a facility for premium private healthcare delivery and partnership with visiting regional and international Medical teams to Ogun state.

A tender document obtained by this reporter showed that the hospital is a four-story 18,000 Sqm facility expected to have a 60-bed acute surgical and outpatient center with critical care capabilities delivered at the public and private health care levels.

The facility is also expected to offer emergency stabilization for cases before evacuation where necessary. The hospital will also provide immediate value as a diagnostic and surgical referral center for the state.

The hospital will also become a surgical internship location for medical students at Olabisi Onabanjo University Teaching Hospital (OOUTH) and the state’s school of nursing.

The hospital is equipped to provide radiology diagnostic, laboratory, accident and emergency, maternal and childcare services, oncology and nephrology services, surgical services, and outpatient clinics. There are four operating suites. 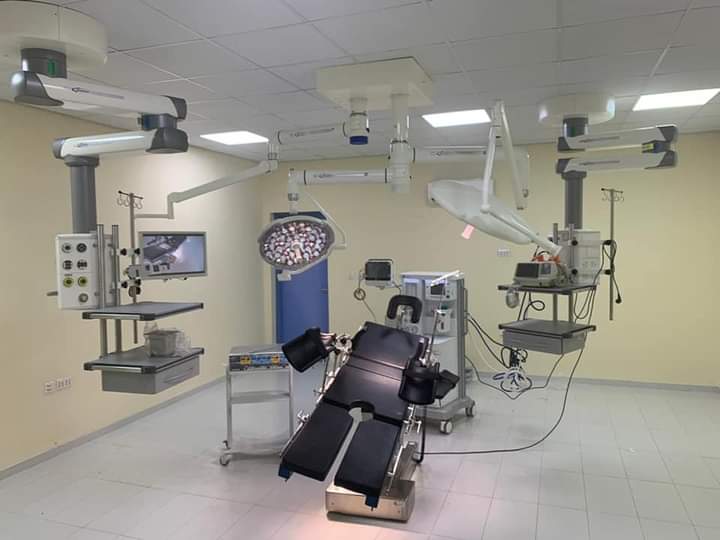 Three years after the president commissioned the hospital, the facilities are now lying fallow; the structure has become abandoned and surrounded by bushes. 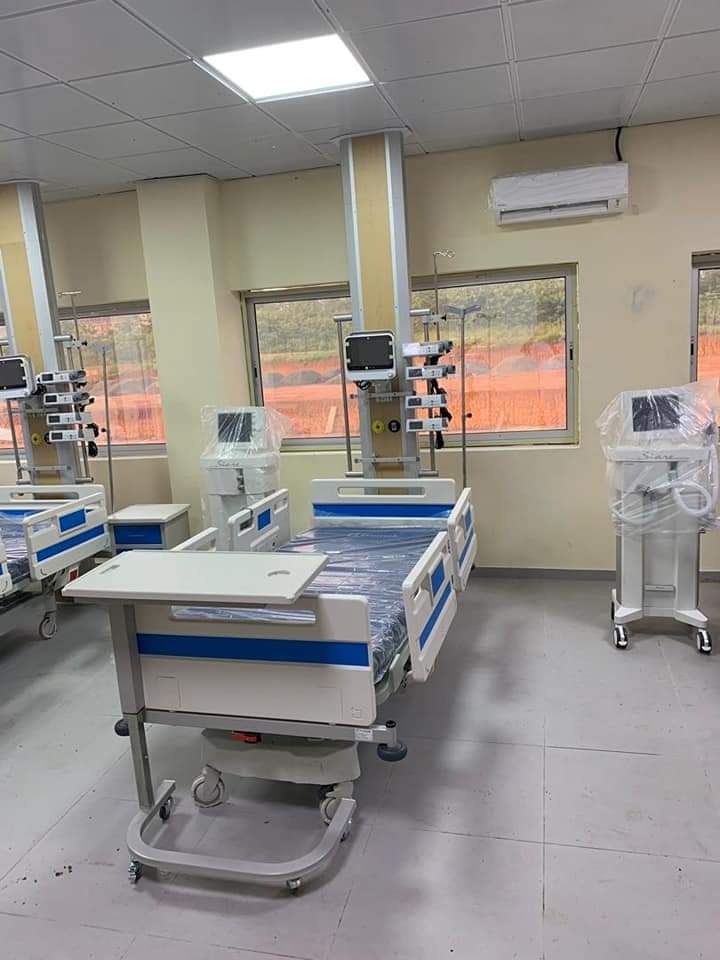 The four-story building painted white looks like a completed structure that just needs little touches, but when this reporter entered the building, it was discovered that many of the facilities have not been put to use.

It was evident that all the equipment in the hospital have never been put to use. This reporter discovered that all beds in the intensive care unit located on the first floor, which have a functioning ventilator were never used. Monitor, syringe, and infusion pump with fully integrated headboard, and integrated medical gas supply could also be sighted lying unused inside the abandoned building. 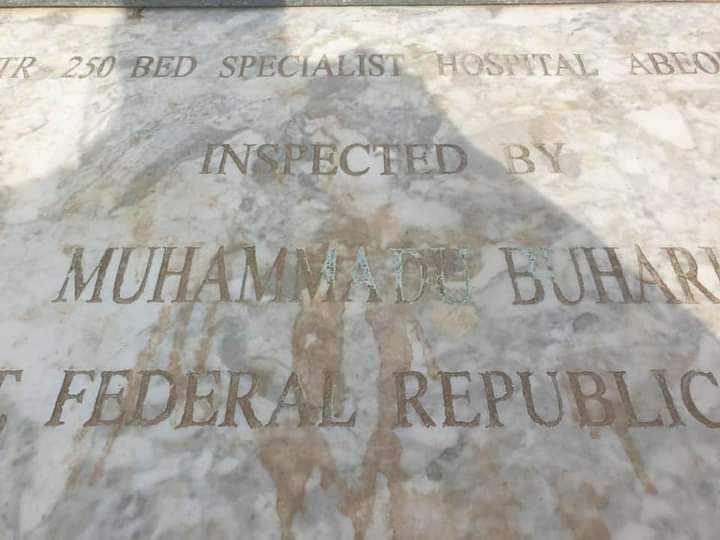 It was also discovered that many building materials which include ceiling materials, pipes, and tiles could be seen in a corner of one of the rooms in the building.

While properties and equipment worth billions of naira were left to rot at the 250-bedded hospital, general hospitals and primary health remain in shambles. 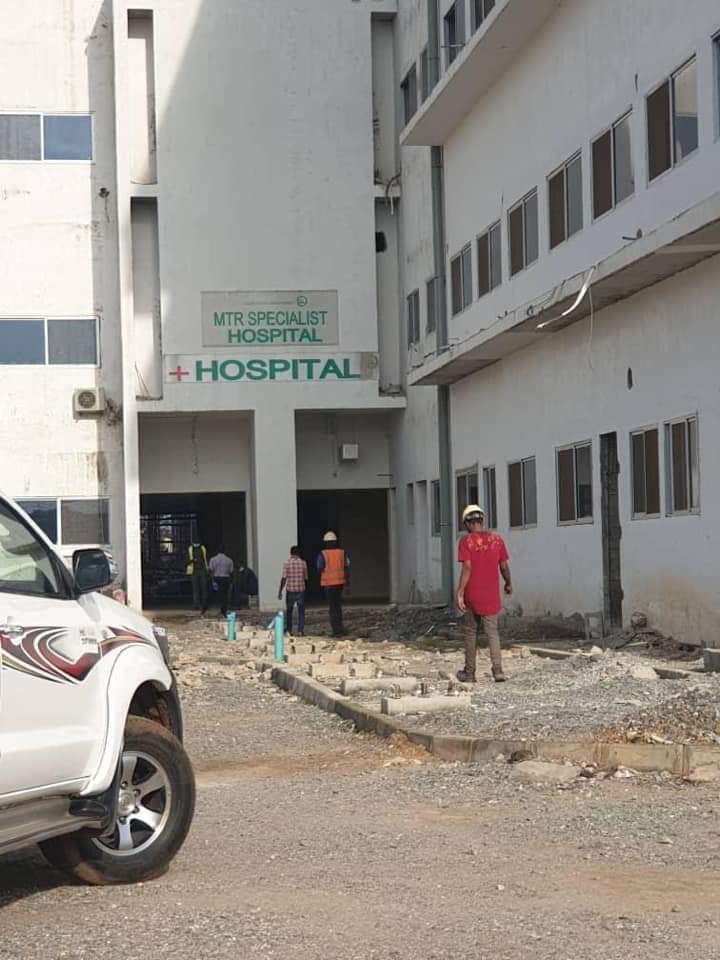 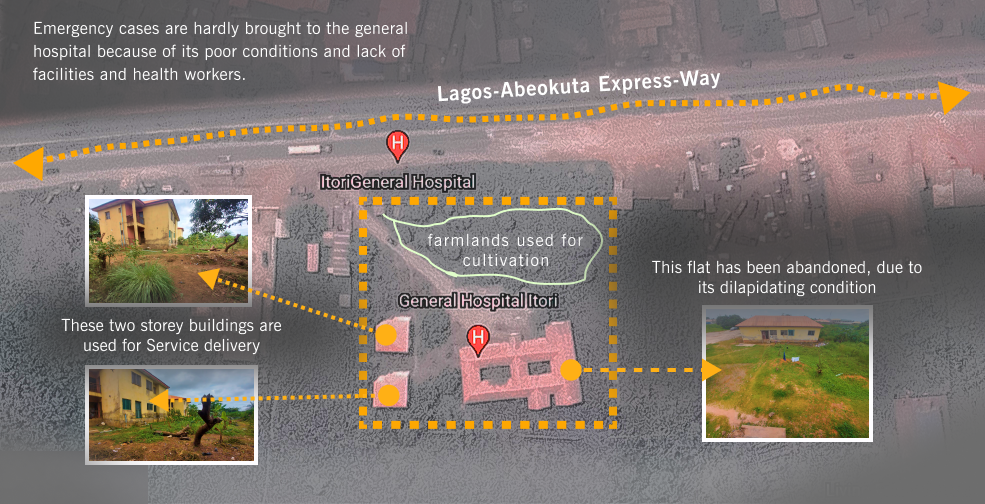 The condition of the Itori General Hospital, which was strategically located at the roadside of the popular Lagos-Abeokuta expressway, is worrisome. Although it was learned that the hospital was by the roadside to cater for emergency cases around the expressway, the investigation revealed that emergency cases were hardly brought to the general hospital because of its poor conditions and lack of facilities and health workers. 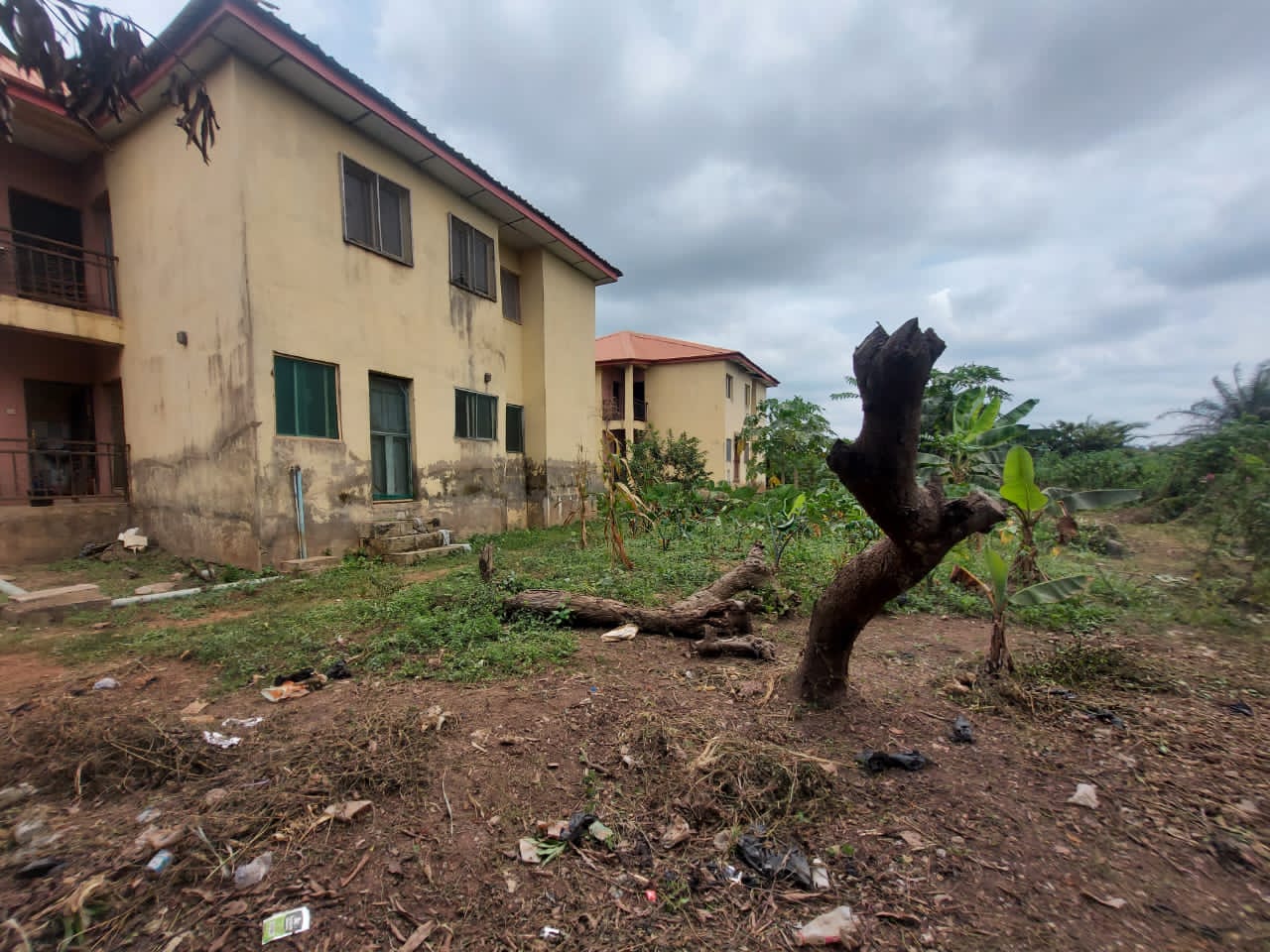 During a visit, it was observed that the empty lots in the compound are being used to cultivate cassava, corn, and vegetables.

Sources within the local government told this reporter that the hospital suffers a shortage of staff. 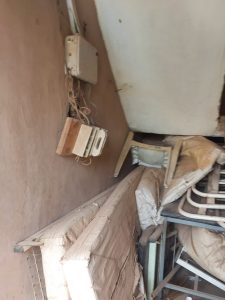 There are three buildings in the compound. Two of the buildings are two-story buildings while the biggest one is like a flat.

As this reporter later learned, the flat has been abandoned, due to its dilapidation condition.

A worker there said a two-story building located at the end of the compound is the one used for service delivery.

At the staircase, this reporter sighted some dusty iron beds and mattresses under the stairs.

Getting upstairs, there were two workers at the reception – one is a health worker while the other, a man, was in charge of patients’ records.

After a few minutes of sitting down outside under the pretense of expecting a to-be patient, this reporter approached the registrar to direct him to a toilet to ease himself.

The registrar said this reporter will have to urinate at the back of the hospital since there is no toilet at the general hospital.

While heading towards the back of the hospital, this reporter observed that part of the fence has dilapidated and overgrown bushes dominating parts of the premises. Some of the pipes used for the toilets were broken, and the paint had faded away.

A security man at the hospital told this reporter that patients have deserted the hospital due to a lack of facilities and health care providers. He said he started farming in parts of the premises because they were hard put to use.

He revealed that there is no ambulance at the hospital, and despite being a general hospital, it does not attend to emergency cases.

“And the thing is, we don’t admit accident patients. We only attend to patients with minor illnesses and child delivery.

“The toilet will chase urine away. I never see people use this place. If you can enter inside the bush. Just bend down, nobody will see you. Some patients do the same”, a worker at the Ifo general hospital told this reporter.

The ifo general hospital which was also strategically located by the roadside of the Lagos-Abeokuta expressway is expected to serve more than 50 communities.

While toilets at the hospital lack water and are poorly maintained, an abandoned toilet building was seen in a section of the hospital. 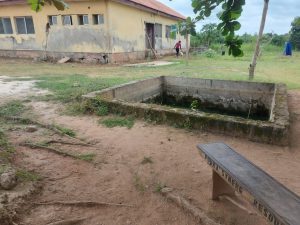 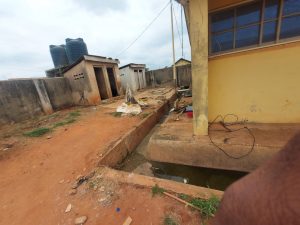 A plaque on the wall showed that it was renovated by the community. One of the health workers said she had never seen anyone use the facility before.

This reporter took a walk around the premises and observed that the noisy sound of generators was coming from almost every department at the hospital. Meanwhile, a small transformer was sighted at a section of the hospital. There was no electricity for the duration of three hours spent on the premises.

The immediate-past commissioner for Health, Dr. Babatunde Ipaye, said the former administration built the 250-bedded hospital because it aimed at reducing medical tourism.

He said the vision of the Ibikunle Amosun-led government is to make the specialist hospital a referral center for the whole of sub-Saharan Africa.

Ipaye also explained that Abeokuta was selected as the location is the capital of the state.

“We decided that let us build a hospital that would take care of some of these. Many cases being taken abroad sometimes do have issues during transmission like the problem of visa, among others,” he said.

“The essence is just to become a referral center for high-end service”.

The former health commissioner, however, said high-end equipment, such as CT Scan, MIR, and other sophisticated equipment including ventilators cost N2 billion.

He explained that Amosun’s government got about a 30 percent discount from an American multinational conglomerate incorporated in New York City, General Electric Company.

According to him, the prices we got, nobody can get it anywhere, we have paid nothing less than N1.5 billion to the company. The building cost about N3.6 billion from the initial quote of about N6 billion.

“The former governor negotiated it to N3.6bn and I think he has paid about N2.5 or something I am not too sure.”

The former health commissioner, however, said before the government left, the hospital had reached 80 percent.

He said: “This government when they came did a teaser inviting the public interest and in their teaser, they put it that this is 80 percent completed by their assessment.

” It was an advert signed by Dapo Ogunboyejo on behalf of the government. So, if they have sent that kind of a teaser to the international community that the hospital is 82 percent completed as at the time they took over.”

Experts suggest a way out for Governor Abiodun

Dr. Kunle Salako, a public health physician and former commissioner for health in the State suggested that the government should align the hospital with the government-stated program of developing one single specialist hospital per senatorial district of the state.

“I suggest that the 250 bedded hospital be developed into a world-class fertility center in partnership with the private sector and the existing Oba Ademola Maternity Hospital, Ijemo-Abeokuta relocated to the place,” Salako said.

Also, a former National Secretary of the Nigerian Medical Association, Dr. Adewunmi Alayaki, advised that the specialist hospital should be completed and put to the use for which it was built.

The state governor said in 2021 that the state government is looking for investors that will develop the 250-bed hospital in Abeokuta into a world-class health facility capable of providing quality healthcare services to the people.

The governor also invited investors to collaborate with the government on major infrastructural development projects under its public-private sector partnership arrangement.

Several efforts to get comments from the state government were not successful, as the health commissioner Dr. Tomi Coker refused to pick up calls or reply to the text messages sent to her.

WORLD NTD DAY: Over 1.4million Children in Ogun are at risk of Schistosomiasis, others – Commissioner for Health

Can alcoholic bitters prevent next pandemic?