Less than 24 hours after the Independent National Electoral Commission, INEC, officially released the names of all presidential and National Assembly candidates who are qualified to contest in the 2023 general elections, it became obvious that some tents had been pulled down, and the hopes of many who thought they could muscle their way onto the list became dashed, and the reality of the political game ahead is now dawned on several others who thought politics was mere child’s play and a theatre for all-comers. 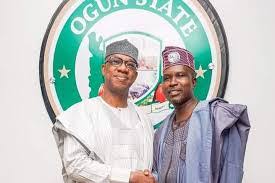 For some others, it also signaled the beginning of a war of words and letters against those they perceive as threats to the accomplishment of their already failed political ambitions. Their lame political strategy is to start a battle they cannot finish by sponsoring unprofessional, bile-infested and poorly written articles in the media space, using untrained, wannabe journalists who are always seeking crumbs from the table of politicians to make ends meet.

One of such write-ups is the one cooked by a certain Temidayo Akinyele on a news website platformsafrica.com describing the erstwhile Chief of Staff to the current governor of Ogun State, Dapo Abiodun as “a ticking time bomb” which is already shattering their blurry glasses of political naivete, their tactless minds, and their structureless political base – if they even have one, to start with.

The unsavory concoction of a piece, which smacks of intellectual weakness and the hallucinations of a hungry writer, is deliberately targeted at disparaging and discrediting the person of the APC senatorial candidate in Ogun Central, Shuaib Afolabi Salisu, SAS.

The jittery sponsors of the write-up are livid because they have not been able to match the public communication competence of SAS and they find it very hard to connect directly with the people across all the six local government areas that make up Ogun Central senatorial district. SAS has been holding strategic meetings with relevant groups and individuals including members of community development associations so much so, that anytime SAS sneezes, his detractors and their sponsors catch a life-threatening cold.

It is unfortunate that these charlatans also attempted to turn around the anonym (SAS) to suit their attention-seeking plot by downplaying the swine flu also known as SARS, which was a global catastrophe that confronted the human race in 2003. The writer also attempted to ridicule the successes recorded by the Nigerian youths during the nation-wide protest against police brutality in 2020, by toiling with the ENDSARS protest catchphrase even as its second anniversary is around the corner.

But it is clear that Shuaib Afolabi Salisu, will not, for any reason, change this political anonym SAS which he has built over the years, and long before the two incidents; and perhaps, while the writer and his sponsors were crawling with diapers – if they ever had any.

I also think that Shuaib Afolabi Salisu, SAS, need not dignify the writer and his sponsors with any form of attention in their macabre dance in the muddy puddle, the SAS campaign team should rather engage in the intellectual conversations, which our candidate is known for.

Expectedly, the sponsored piece by the political bigot attempted to disrepute a man who has built strong political clout as a grassroots politician, a strategist, and boardroom technocrat with two successive governments in Ogun State; serving as deputy Chief of Staff to Senator Ibikunle Amosun and Governor Dapo Abiodun, respectively. Perhaps the writer needs to read more and learn about what the role of the chief of staff to a governor entails.

For a man who was born and raised in one of the most remote villages in the Opeji area of Odeda local government, and was able to surmount the ordeal of poverty, excel with flying colors as a computer science student at the prestigious University of Lagos, with a scholarship to his record, and with a masters degree in computer science and another in Business administration, one would then realize why his intimidating resumé is a major cause of worry for his detractors.

For many who may not know, SAS is an unmitigated intellectual with a varied knowledge of the corporate world, public service, and not-for-profit organizations.

He was the candidate of Action Congress of Nigeria, House of Representatives, Abeokuta North, Obafemi-Owode, and Odeda in 2009, and also contested for the Ogun Central Senatorial District on the All Progressive Congress ticket in 2015.

SAS was a Banker at the defunct Equatorial Trust bank and Pacific Merchant bank. The 57-year-old former chief of staff had an early career in the Oil and Gas sector and worked variously for Total and Mobil oil. SAS is a Certified Business Intelligence consultant and a Fellow of the Computer Society of Nigeria; he has attended several conferences and delivered papers on corporate governance, ICT, and management across four continents; and is a respected voice in the ICT industry.

He played a pivotal role in the restoration of the integrity of the Joint Admissions and Matriculation Board (JAMB), where he led the team that actualized the computer-based tests initiative. Before then, he had led a World Bank project that midwived the transport sector transformation in Lagos State and was the main ICT consultant in Edo, Ekiti and Kano States, and the FCT at different times.

Before he was appointed a senior aide to governor Dapo Abiodun, SAS ran his private company, Simplex Auto Systems, an IT solutions providing company while playing active representative politics of ideology in the background.

These rare attributes stand Shuaib Afolabi Salisu out as a worthy representative of the people in the Ogun Central senatorial district. He has lived among them; he knows their pains and shares their common values. Ogun Central Senatorial district deserves a man with strong ideological principles, local knowledge of development economics, and a track record of service to the people at the grassroots. Unlike his detractors who are mere political jobbers, Shuaib Afolabi Salisu is not ready to fight with pigs; he will not go that route but would rather allow them to revel in their muddy enclave – because that’s where they truly belong.