Residents and traders at Panseke area in Abeokuta, the Ogun State capital  have raised the alarm over the activities of hoodlums who are damaging parts of the multimillionaire pedestrian bridge built by former governor Ibikunle Amosun. 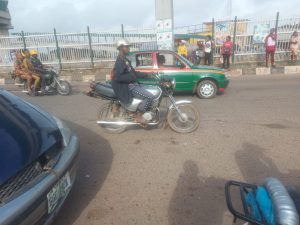 Some traders, who refused to mention their names for fear of attack,  told PLATFORM TIMES that the iron-bar used for the road demarcation has been  removed overnight, adding that the culprits are unknown.

PLATFORM TIMES observed that the iron-bar used as a demarcation under the multimillionaire pedestrian bridge have been detached.

PLATFORM TIMES further observed that residents as well as passers-by are crossing through the cleaved path under the bridge.

It was also observed that iron-bar under the main bridge has been damaged, making the place to serve as an abode to vagrants.

Effort to make the Babaloja of the market to speak prove abortive as he could not be reached at the time of filing this report.

When contacted, the state Commissioner for Works and Infrastructure, Engr. Ade Akinsanya said residents are risking their lives while crossing through the road under the pedestrian bridge.

Akinsanya further advised that damaging government project will result to wasteful spending, adding that such act has its consequences.

He, however, added that the removed iron-bar would be replaced.

He said, “If we decide to replace them, we cannot be doing that constantly; it’s your (tax) money and you want us to spend it judiciously. We try to replace them, I know their couple of locations. “

He further appealed to residents to take precautions and stop crossing through the cleaved path as it poses accident within the area.

“It’s for the safety of the people. I don’t want anybody to be knocked down trying to cross, that’s why they have pedestrian bridge there. But we’d try to replace them”, the Commissioner said.