A century and twenty-five years after the British forces invaded the Old Benin Kingdom and Carter away some artefacts during the Benin Expedition of 1897, thirthy-one looted cultural and historical bronzes of Benin have been repatriated to Nigeria by the US. 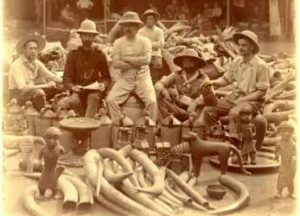 The ancestral bronze art named ‘Head of a king/oba’, and some other Benin bronzes have been repatriated by the United States through one of its National Museum, Rhode Island School of Design Museum (RISD) to the Nigerian National Collections during a ceremony at the Smithsonian Institution in Washington, DC on Tuesday.

Speaking at the ceremony, the Nigeirian Minister of Information and Culture, Alhaji Lai Mohammed commended the United States for not only engaging Nigeria in the discussion but also executing the repartition.

Lai Muhammad, who was quoted in a statement by Segun Adeyemi, the Special Assistant to the President (Media), Office of the Minister of Information and Culture, went further to explain that the artifacts are best examples of the culture and history of the Nigerian people and are inseparable from them.

“Please permit me, on behalf of the government and people of Nigeria, to most sincerely thank the United States and her major cultural heritage institutions for the return of these highly-cherished Benin Bronzes to Nigeria – which is the reason we are here today.

“These artifacts are intrinsic to the culture that produced them. A people ought not be denied the works of their forebears. It is in the light of this that we are delighted with today’s repatriation of the Benin Bronzes,” Lai Muhammad said, in quote.

RISD Museum Interim Director Sarah Ganz Blythe said in a statement that, “In 1897 the ‘Head of an Oba’ was stolen from the Royal Palace of Oba Ovonranwmen.

“The RISD Museum has worked with the Nigerian National Commission for Museums and Monuments to repatriate this sculpture to the people of Nigeria where it belongs,” Blythe said

In acceptance and assertion that there had been cases of ‘historical injustice’ and ‘cultural theft’, the US Museum said it considered it pivotal to restore the stolen Benin Bronzes to Nigeria, as their part of the mission to return African culture to Africans.

“Through this repatriation, we acknowledge a legacy of cultural theft and do our part to return African culture to Africans.”

PLATFORM TIMES gathered that in August, 2022, Germany had agreed to transfer ownership of the Benin Bronzes in its museums to Nigeria.

The collection was described as the most extensive transfer of museum artefacts from a colonial context to date and covers 512 objects which ended up in Berlin in the aftermath of the 1897 looting.

Similarly, in the same month, the Horniman Museum and Gardens in London announced it would transfer a collection of 72 Benin Bronzes to the Nigerian government.

Also speaking at the ceremony, Director General of Nigeria’s National Commission for Museums and Monuments, Abba Isa Tijani, said he hoped the latest transfer would inspire other museums to return African artefacts.

“We hope for great collaborations with these museums and institutions and we have already opened promising discussions with them concerning this,” he said in a statement.

“The entire world is welcome to join in this new way of doing things. A way free from rancours and misgivings. A way filled with mutual respect.”

My Successor ‘ll Perform More Than I Did, Outgoing OOU VC Assures

My Successor 'll Perform More Than I Did, Outgoing OOU VC Assures