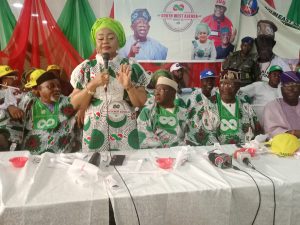 Speaking at the Women for SWAGA event which was held in Abeokuta, the National Women Leader for SWAGA, Ayo Omidiran disclosed that the inauguration would extend the wings of the movement to the local communities in view of the coming election. 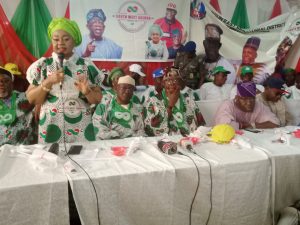 Omidiran explained that the inaugurated senatorial women leaders would represent the movement in their local communities who would appoint local government coordinators who would take the message of their candidate to the grassroot.

She said in part, “Women are the chief mobilizers, we are first and foremost politicians and as politicians we know what to do to win elections. We know that the most important project right now is to deliver Aiwaju Bola Ahmed Tinubu, and our gathering has shown our readiness to do that.

“We must ensure we deliver Asiwaju as we believe our principal, Asiwaju will deliver on his promises for us.

“We are a grassroot movement and we cannot stay at the Federal or state to canvass votes and that’s why we are moving to the grassroot. The lowest unit is the polling unit and we must ensure we all get down there to vote.

“As ambassadors of Asiwaju, get courageous women that are courageous to talk and command respect in their communities , they are the people we want you to bring together to spread the message that Asiwaju Bola Ahmed Tinubu should be given the opportunity to rule Nigeria for the maximum eight years given in the constitution”, she said.

The gathering which was honoured with the presence of some dignitaries in the group such as the SWAGA National Chairman, Senator Dayo Adeyeye; SWAGA Ogun Chairman, Sen. Olugbenga Obadara; the Lagos Chairman, Hon. Monsuru Alao; Hon. Oye Ojo; Hon. Ifedayo Abegunde; among many others.

Speaking on the promises of the candidate, Bola Ahmed Tinubu, the SWAGA National Chairman, Sen.
Dayo Adeyeye said the candidate had sent him to tell the women group of his plans to put women at the forefront of his administration.

He said, “Asiwaju has said that Nigerian Women will have the best of opportunities, better life such that they gave never had in this country. He said women would be at the forefront of his administration in the country. He appreciates the efforts of women towards his aspiration.

“Swaga is God ordained and by the grace of God we will get to the promised land. SWAGA is already recognized as the foremost support group for Asiwaju Bola Ahmed Tinubu”, he submitted.

Also speaking at the event, the Ogun state SWAGA Ogun Chairman, Sen. Olugbenga Obadara, appreciated the crowd of women for coming out enmass to show support for the movement.

Obadara said, “The flags and caps handed over to you are to be used to canvass votes for the candidate, Asiwaju Bola Ahmed Tinubu.”

Meanwhile, speaking on the manifestos unveiled by Tinubu, the convener of SWAGA said the SWAGA women wing was inaugurated at the state level, which wouid lead to the inauguration of women coordinators at the local government level .

He said “We have listened to his manifestos and we have just launched the SWAGA women wing at the state level, the women will go out there to inaugurate local government coordinators, Ward coordinators and polling unit coordinators.

“They should propagate the message of Asiwaju and we can see what he said in the manifestos and how it is going to benefit Nigerians.

“It is a rich manifestos and this is a man that is going to achieve that manifestos. We want all our people to back, carry the message, and why they should support for BAT,”