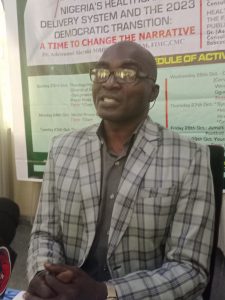 The NMA Chairman in Ogun state , Dr. Kunle Ashimi said this at a press briefing to Mark 2022 Physicians’ week.

The association said the engagement is packaged to ensure that the candidates have good plans for healthcare of the masses.

The statement reads, “as a matter of fact before the end of November, the Nigerian Medical Association, Ogun state branch will be calling all candidates for the office of Governor of Ogun state to come and present to the people and the medical community their plans for the health sector.”

Speaking, Ashimi noted that politicians had for long deceived the masses by declaring free healthcare services without making provisions for it.

He noted that the engagement is to also curb the menace of fake promises made by politicians.

“Doctors face some threats in the health sector. Some state governments would declare free health care service, and when people get to the hospital only to find that they have to pay a stipend for cards, medicine and others.

“They put the blame on doctors and they will say they have stolen all the drugs because they believe the politicians who told them that it is free.

“And sometimes it’s as bad that people break bottles, stab doctors, hit us with planks. There was a situation where a patient removed louvers and start pursuing doctors all over the place for what is not their fault.

“Now, the people themselves are beginning to see it. So, the politician should realize that we are critical stakeholders in this sector and we have started showing them that we have options and we can leave.

“So, they need to come and tell the people what they have to offer the masses because by ensuring that they have good programs, it can determine how these people will sway.

“Many people have suffered at the hand of the poor health system and they wish that somebody would come and make it better or somebody that is there have plans to make it better.

“So, they need to come and tell people their plans. So, if they don’t come, we will tell people that we called you but you did not show up and which apparently means you have no plans for them. So, you can not belittle the people you want to serve. We are here to ask questions.

“There is no apathy anymore, there is no party sanction. If we call you and you don’t answer, that is your kettle of fish. We will tell the people that we called you and you did not come and what that means to us is that you do not have plans for the people. And we do not support that anybody vote for you.” He said