The battle line seems to have been drawn between the Ogun state governor , Dapo Abiodun and the Nigerian Union of Pensioners over controversial N78 billion payment of gratuities and  pensions. 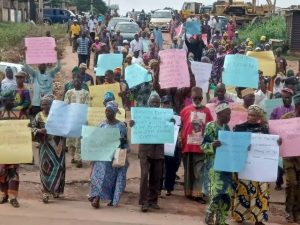 Residents of the state were  thrown into confusion over the claim and counter claim by both parties .

While the pensioner who are senior citizens described Abiodun who has spent over three years in office as a liar, the governor debunked the bad name being thrown at him.

The governor who  had fired the first salvo last week during a Town Hall Meeting on the 2023- 2025 Medium Term Expenditure Framework (MTEF) and 2023 Budget for Ogun East Senatorial District, held in Ijebu-Ode, claimed that over N70 billion had been released for the payment of gratuity arrears since he assumed office in 2019.

This claimed went to the wrong side of the pensioners who described the governor as a liar for claiming that he paid them  N70 billion as gratuities and pensions.

The pensioners spoke through their Chairman, Waheed Oloyede , saying, the N100m increment to the N500m quarterly payment for gratuities was not enough, lamenting that it would take more than 30 years to clear the backlog of gratuities.

Oloyede said Abiodun only paid N3 billion for gratuity since he assumed office in May, 2019 and not N70 billion as he claimed .

Twenty-four hours after the pensioners’ reaction , the governor countered the claims that only N3billion had been released so far for the payment of arrears of gratuity and pensions.

But a statement by the Chief Press Secretary to the Ogun State governor, Kunle Somorin, on Thursday, faulted the position of the NUP chairman and declared that a sum of N78b had been released between 2019 and 2022.

According to him, a record of the statement of Monthly Breakdown and Analysis of the Ogun State Gratuity and Pension Payment, indicated that a total sum of N78,567,913,997.48, had been released for the purpose.

Somorin added that the Governor Dapo Abiodun-led administration decided to increase the quarterly payment from N500m to N600m, to expedite payment of the gratuities.

He noted that the incumbent administration, despite the financial challenge, would continue to give top priority to the welfare of the senior citizens, by ensuring the quarterly payment of the gratuities and pensions.