Emotuon ran high among the students of the Moshood Abiola Polytechnic, Abeokuta when the news filtered that two of their colleagues have been abducted by gunmen on the Lagos-Ibadan Expressway 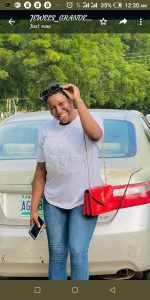 The students were reportedly abducted after the commercial vehicle they were travelling in were abruptly stopped by gunmen around Oni Garri between Ogun and  Oyo states on Friday night.

PLATFORM TIMES gathered that a final year student of Business Administration department, Oluwatobi Orekoya. was one of the victims

A source hinted PLATFORM TIMES that the abducted  students were going for a ceremony in Ibadan when the incident happened which also involved a former Deputy Vice Chancellor of University of Ibadan, Adigun Agbaje.

The source said  that about three vehicles were involved but, some of the occupants quickly escaped into the bush, but, the two students and Agbaje were not lucky as they were pinned down by the gunmen and taken into their den.

PLATFORM TIMES gathered that few  hours after the incident happened, the gunmen had  reached out to the families of the victims and demanded ransom .

The source said the  kidnappers had reached out to the parents of Orekoya  and demanded a sum of N10m from them for the release of their daughter who was writing her final year exam .

Confirming the incident , the Public Relations Officer of MAPOLY, , Yemi Ajibola said that the management has set up a machinery in motion to look into the matter.

He said, “I am aware that our students have been kidnapped. The Students Union President called to inform me this morning. We have stepped into it. The Rector has called the people that can assist and the machinery has been put in motion to see what we can do to get them.

“To the best of my knowledge, there are two. The Director of Students Affairs told me that they are two but I know one of them.”.

The Students Union President of the institution, Comrade Sodiq Damilola Ajani popularly known as Optimum confirmed the incident in a press statement titled, ‘Request For Financial Support and Prayer’.

The statement reads in part, “Late yesterday, a final year student of the Business Administration and Management Department, Orekoya Oluwatobi was reported to have been kidnapped by unknown gunmen along Ibadan expressway!

“The unknown gunmen called to collect a ransom of 10 Million Naira. In view of this, we seek for public financial assistance and prayer,” Ajani prays.

While soliciting funds, he said that the student’s family cannot raise the ransom alone, therefore, they were seeking support from all quarters available.

“I was told that one of the ladies is our student. She was on her way to Ibadan for a party in Onigarri. The family cannot raise the fund alone, so we have reached out to the state government and SA on Students Affairs for support.

In what could have been a disaster and embarrassment was averted as angry students stormed the venue of the coronation at Oba Odeleye Park at Sokori, Abeokuta with a view to stage a protest .

PLATFORM TIMES gathered that the protest was to solicit N10m from the donation made at the coronation fir the ransom , but, the SU President reportedly prevailed on them .

Ajani was said to have hinted shortly after the angry students had taken off to the venue to display placards and luckily, he persuaded them to adopt another method .

Some of the students were captured by PLATFORM TIMES while gathering to restrategise for the fund .

Speaking on the planned protest, Optimum revealed that, “The students almost caused another issue as they were too emotional. They were planning to storm the Olowu Coronation with placards to seek funds for the ransom but I had to stop them to prevent allegations and suspicions that the action was politically motivated to disrupt the ceremony. By the way, we cannot expose her like that, since it happened in Oyo State.”

Meanwhile, the Public Relations Officer of the Oyo State Command, Adewale Osifeso, says, in an attempt to engage the gunmen , “an Officer attached to the Command paid the supreme price with one other badly injured and presently responding to treatment.

In his words, as obtained by PLATFORM TIMES, he said, “So far, expended ammunition shells and (4) four abandoned vehicles were retrieved at the scene.

“Furthermore, the Commissioner of Police, CP Adebowale Williams psc(+)fdc has ordered Full-Scale scientific and technological aided Investigations to unravel the events that led to the incident with the Deputy Commissioner in charge of the State Criminal Investigation Department leading the Charge,” he added.

The police have however, appealed to the public to report anyone found with a gunshot wound or blood stain to the police immediately.