Ogun State Governor, Dapo Abiodun has presented the Staff of Office to the Oluwu of Owu Kingdom, Oba Prof. Saka Adelola Matemilola, during the coronation and celebration of Odun Omo Owu. 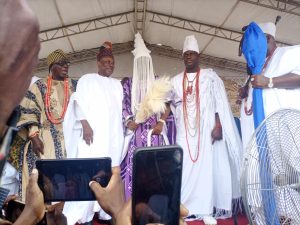 Abiodun, who reiterated that the election of the new king followed due process in accordance with the dictate of the laws of Obas and Chiefs in the state, prayed men and women of Owu Kingdom to give the new king the support he needs to achieve his set objectives for the kingdom as it remains part of the goals of the state by extension.

Abiodun, while presenting the staff of office, said, “By virtue of the Obas and Chief laws, I do hereby declare that the appointment of Prince Saka, Matemilola, as the Olowu of Owu in the area of authority of Abeokuta North Local Goverment, approved on the 25th day of July, 2022 by the Ogun State Executive Council, is given, order by hand, and the public seal of the Ogun State Government. Kabiyesi, congratulations.

“Kabiyesi, by your appointment as the new Olowu of Owu you have become a high ranking member of the Egba Traditional Council and a Permanent Member of the Ogun State Council of Obas.

“Alayeluwa, I am not in doubt that you regard this appointment as a call to serve. I am also confident that you will concentrate on the task of accelerating the pace of socio-economic development in Owu Kingdom and Egbaland by mobilizing your people in such a manner that their efforts will complement the initiatives of our Administration encapsulated in “ISEYA” mantra which sterns from our “Building Our Future Together” Agenda.

“We believe that your vision for Owu Kingdom is aligned to ours as we continue to ensure a focused and qualitative governance and to create the enabling environment for a public private sector partnership, which we consider fundamental to the creation of an enduring economic development and individual prosperity of the people of Ogun State”, Governor Abiodun stated.

In the bid to support the reign of the king, the Ogun State Governor, Dapo Abiodun donated a support fund of 15 million naira, while Senator Ibikunle Amosun donated 20 million naira; while Otunba Gbenga Daniel contributed a million naira to the king’s reign.

In attendance at the coronation were; the Ooni of Ife, Oba Adeyeye Ogunwusi; the Alake Of Egbaland, Oba Micheal Gbadebo; Former Ogun State Governor, Sen. Ibikunle Amosun; former president of Nigeria and Alogun of Owu, Olusegun Obasanjo who was ably represented by the Otun of Owu, Chief Doja Adewolu; Olu of Warri, Ogiame Atuwatse III; PDP Senatorial Candidate, Chief Olumide Aderinokun among other eminent dignitaries honoured the coronation which held at Sokori, Abeokuta.

Also speaking at the event was the Abeokuta North Local Government Chairman, who acknowledged the presence of dignitaries and urged the people of Owu and environs to rally round the king to foster peace and progress in the community.

He said, “It is with great pleasure to welcome all dignitaries to this special event today, to record another milestone event today in Abeokuta North as Prof. Saka Matemilola is being installed and presented the Staff of Office by the State Governor, Dapo Abiodun.

“I wish to state that the enthronement of the new king as the custodian of traditional and cultural heritage of Owu Kingdom would birth a new era in Abeokuta North Local Government and by extention Ogun State as a whole.

“I wish to advice the indegenes, residents and all people living in Owu Kingdom to rally round the kabiesi in achieving peace, prosperity and progress.

“On behalf of the good people of this local government, I wish you a happy, hitch free and eventful tenure of office.” He concluded.