Olomore is a popular community in Abeokuta, the Ogun state capital. This place in under the Abeokuta-North Local Government Area of the state. 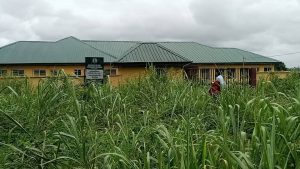 Shockingly, the area is populated mostly by educated people who include retirees and both federal and state workers .

Despite this status, their situation is similar to the case of a rich who also cries . 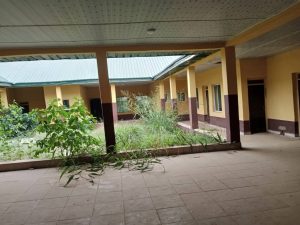 Baring last minutes steps by the government to address the plight of millions of the dwellers of 80 communities with 250 people each, the residents who include pregnant women , children and the aged go through ‘hell’ to access healthcare due to the abandoned healthcare project .

…How The Project Started

Twelve years ago, the Association of Local Governments of Nigeria (ALGON), the umbrella association of all the Local Governments and Area Councils in the country, dangled the hope of accessible healthcare before the residents of the Olomore community, but after over a decade, all that they have is an abandoned primary health centre, overgrown with bushes and occupied by reptiles. 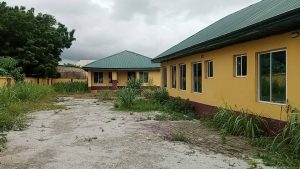 The project started in 2010, but it was abandoned multiple times due to a combination of reasons, which, according to the leadership of the community, included: incompetence on the part of the contractor, and inconsistent disbursement of funds, among others.

PLATFORM TIMES visited the abandoned health centre and observed that the yellow and green painting of the building has been washed off; its walls and surrounding fences are falling, and thick grasses battle with the rusty iron gates for space. According to the secretary to the Community Development Association, Moruffdeen Bello, the contractor claimed that the amount released by the government was not sufficient, so, members of the community, even in their penury, contributed resources for the completion of the clinic. Today, they watch with despair, the futility of their efforts. 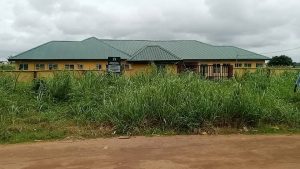 “When the project started, they got it to lintel level and even covered it but the community then, while we were supervising the project, we discovered that it was totally substandard, if one uses the tip of her finger to hit the wall, the hand would go into the block so freely, so we had to protest then.

“The contractor stopped, and the project was abandoned for a while. We raised money from ourselves to try and reinforce those weak blocks, then after we learnt that it had been awarded,” Bello explained.

He said the project was re-awarded, yet abandoned again. “The community was not carried along,” he added.

“What we were told was that the new contractor was to improve the situation of the project. To refurbish, renovate and complete the project, contrary to the later information that we had that they were supposed to restart the project because the quality was bad.”

He told PLATFORM TIMES that the project has been abandoned again last year, even though the community had to assign some people to supervise the workers. “They just stopped coming,” he sighed.

Residents Depend on Other Communities For Healthcare

Residents of this community have to bear the brunt of the lack of healthcare facilities; travelling miles to seek medical attention in primary health centres in neighbouring communities. For the few who could afford it, they patronise private hospitals.

This has caused hardship for a majority of the residents who are poor. Pregnant women are discouraged from attending antenatal due to the distance of available public clinics. The sick and old must endure the long distance to neighbouring communities even for minor illnesses, or resort to self-medication.

A resident and Zonal chairman of all CDAs in Abk North, Chief Kazeem Ajagunjeun lamented how the negligence of the primary healthcare centre is affecting the residents. He said some of the residents have to visit hospitals as far as the Federal Medical Centre, Idi Aba, which is over 15 kilometres from the community.

“In all sincerity, the negligence of this project is really affecting us negatively because our pregnant women, the vulnerable ones, young ones, and infants. Sometimes we go to FMC, as hospitals in neighbouring communities lack facilities. FMC Idi Aba is about two or three local government areas from here and it is not convenient .

“Even at night, it is always a terrible case, we are appealing to the relevant authorities to come around for humanity’s sake and fear of God and fix this place.”

He added that the completion of the project would also be of benefit to neighbouring communities who also lack convenient access to healthcare.

He said, “Our people need the service this hospital has to provide, the nearest health centre to this place is not of standard. It is somewhere along Ita Oshin, you can imagine the stress from here to Ita Oshin.

“If you have this one done, even at this stage if they can make some renovation and then equip it, we are a community that believes in self-help, we would do what we can do to improve the place, let them come and equip it for us, let them come and make sure it starts functioning.

“The revamping and equipment are what is delaying this place because there is nothing inside it, aside from the building, there is nothing to show that this is a hospital.”
“It would also help the wellness of people in other communities. Olomore links Soyoye, Oke Ata, Idi Mango and all other communities. We have over 80 Community Development Associations within Olomore alone, a community that accommodates over 250 people. With the supervision, I believe it would serve them too”

The CDA Chairman, Leke Adio also lent his voice to the matter. While he called for the completion of the hospital, he also hoped that the necessary facilities would be supplied for use when it is completed.

When contacted to get his comment on the project, the chairman, Abeokuta North Local Government Area, Adebayo Ayorinde did not respond to calls and text messages after requesting that this reporter sends him the questions

No Alternative To Abiodun in 2023, Awujale Declares