PLATFORM TIMES gathered that Oke was gruesomely killed around 8:30 a.m on Thursday, after responding to a distress call on Wednesday.. 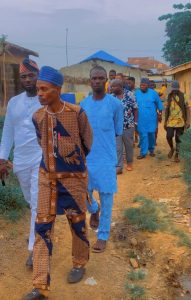 It was gathered that Oke who coordinated activities of vigilante and hunters group in the area got a distress call that some people were being kidnapped by ginmen.

Multiple sources said the slain warrior went after the kidnappers along side two of his men ,but, discovered that the information was fake .

.According to the sources, his attempt to return him failed as he was attacked by gunmen who had already laid ambush for him .

He was reportedly shot at while one of them escaped by the whisker with a gun wound while the other escaped unhurt.

The family and ADC members in the state have been in gloomy mood after the news was broken to them.

PLATFORM TIMES gathered that Oke, a community and a renowned farmer within the community, had successfully brought sanity to the kidnapped-torn zone in the state .

Sources who are residents of the area hinted PLATFORM TIMES that the slain ADC Chairman had led series of onslaughts against killer herdsmen in the community for years .

Findings have shown that many of kidnapping incidents that occured in Abeokuta and it’s environs occured in the area .

Upon hearing the news of his death, some residents were reported to have threatened to leave the community as they claimed that the place was no longer safe for them .

It was gathered that Oke was reportedly killed few days after the community had reopened a market which had closed for long following the fear of kidnappers who struck everytime then.

When contacted, the Police Public Relations Officer of the Ogun State Command, Abimbola Oyeyemi confirmed the death of the ward chairman.

Oyeyemi said the police has commenced investigations into the incident .

“It’s true he was killed. What I heard is that some people said they saw some gunmen hiding at a place and they now called the man, since he’s a vigilante in the community; so they went there to attack those gunmen.

“On getting there, the gunmen had laid ambush for them and that’s how he got shot. One person died while one was injured.

“But we have commenced an investigation into it.”

Oyeyemi however said, contrary to the general belief that he was assassinated, he said until the police command conclude its investigation, the case was an attack by unknown gunmen.

“We cannot jump into conclusion that it’s an assassination case. When you are jumping into conclusion, the implication is that, your mind will be diverted in the course of investigation.

“So, we don’t speculate until we find out the real fact of the matter. But the fact remains that the man was killed by some gunmen.

“I am not aware the man was an ADC chairman. I am not aware of him being a chairman of a political party; I am only aware he is a member of vigilante group and hunter”, the police spokesman said.

Meanwhile, PLATFORM TIMES gathered that the ward chairman had been buried according to the Islamic rites on Thursday.

Also, the Abeokuta North ADC House of Assembly candidate, Kazeem Omotade has commiserated with the family of the slain party ward chairman and the entire community.

In a statement obtained by PLATFORM TIMES on Friday, Omotade said, “The sad incident which claimed the precious life of a great warrior, dedicated party man and head of hunters/vigilante group in Isaga, is such a big blow and huge loss to his family, people of Isaga and Abeokuta North at large.

“Oke was a brilliant, virtuous and dedicated gentleman with a very bright future ahead of him. It is therefore a sad reality that such a brilliant talent and budding star was cut short in his prime.”