How Over 65,000 Ogun Electorate Lost PVCs To Hoodlums Attack On INEC Office

Over 65,000 Ogun electorate have lost their Permanent Voter Cards to the fire incident at an office of the Independent National Electoral Commission office located at Iyana Mortuary in Abeokuta South Local Government area of Ogun State.

PLATFORM TIMES gathered that the office was attacked and set ablaze at around 1:15 a.m on Thursday, where some unidentified persons overpowered the security personnels on duty and set some parts of the office building ablaze. 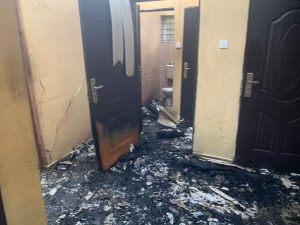 PLATFORM TIMES further gathered that, contrary to earlier claim by the INEC official that non-sensitive material got burnt, vital materials were lost to the inferno.

PLATFORM TIMES learnt that about 65,699 uncollected Permanent Voter Cards, 904 ballot boxes, 29 voting cubicles, 30 megaphones, 57 election bags and 8 electric power generators including the commission’s main building and all the movable assets in the office were destroyed. 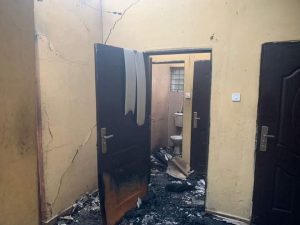 In an exclusive interview with PLATFORM TIMES, the Resident Electoral Commissioner (REC) for Ogun State, Dr. Niyi Ijalaiye, confirmed that the commission has data of the destroyed cards, saying that the commission will reprint them in no distant time.

The REC chairman said, “That’s correct. We have the data and we will reprint, we are collating the cards that were destroyed and will be reprinted. 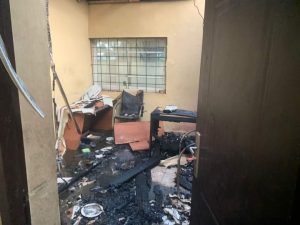 “I don’t know how long, but I can assure you that it will be reprinted within time.”..

Meanwhile, political parties in the state have expressed concern about the attack on the INEC office.

The parties said the attack has a political undertone, charging the security agencies to investigate and fish out the perpetrators. 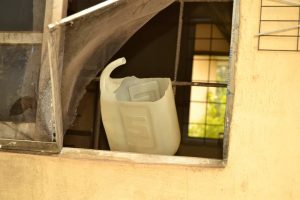 The Peoples Democratic Party accused the ruling All Progressives Congress of being the mastermind behind the attack.

Speaking, the Publicity Secretary of the PDP, Akinloye Bankole said the APC was afraid of defeat thereby making plans to destroy the PVCs of new registrants that will be voting its candidates out. 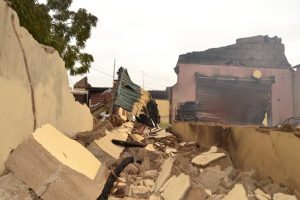 He said, “However, I must say that the ruling government also cannot be totally exonerated from this reality because it has to do with the fresh records of fresh voters.

“I want to start to begin to look at the side of the ruling government because, this point to the point that imminent defeat is staring them in the face and I see it as a desperate pressure to kind of sabotage a lot of fresh voters that may be voting against the ruling APC. I want to point seriously to the direction of the ruling government and I also want to plead and seek a thorough investigation of the entire incident.” 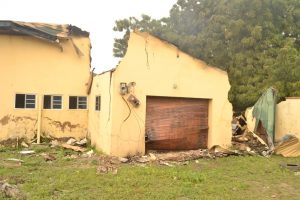 Also, in an interview with PLATFORM TIMES, the state leader of Action Alliance, Hon. Dapo Adeyemi stressed that the hoodlums have political backing to carry out the act.

Adeyemi added that such an incident has never happened before, adding that it will be a threat to the performance of INEC in the coming election. 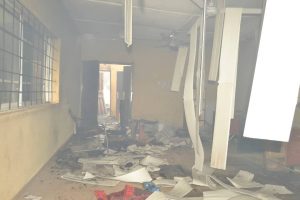 He said, “I just think the security agency should go and unravel those behind; they should be able to apprehend the hoodlums and their sponsors. Definitely, it would have been sponsored by one of the political parties. There is no doubt about that.”

“An average citizen will not go to the INEC office and set it ablaze.

“When INEC facilities are set ablaze, it will definitely have an effect on them. Nobody can tell me it doesn’t have a political undertone.”

Also speaking, the party chairman of the Labour Party, Micheal Ashade said the attack should be investigated as it may have an effect on the candidacy of the party which was yet to settle issues around its candidate. “We are interested in the election because now that our candidate has not been listed and we are in the process of fighting that, we don’t want anything to happen because it will not lead to disenfranchisement of our candidate. Let the parties concerned investigate. They should not leave anything untouched. I hope it’s not sabotage.

Afolabi said, “The security agencies should please tighten security around INEC offices”, adding that some politicians are working to sabotage the election.

His words: “They are working tirelessly for Nigeria not to have next year’s election. I guess that’s what is going on.”

Expressing his view, the chairman of the Peoples Redemption Party, Samson Okusanya, said it cannot be ruled out that the attack was politically motivated.

His words: “It cannot be ruled out but since we don’t know, the right people should be apprehended. I am not saying it’s politically motivated nor am I saying it cannot be true.”

However , several efforts to speak to the APC on the incident failed as the party official contacted declined comment .

The security agencies in the state led by the police visited the scene of the incident and expressed assurance that the perpetrators would be nabbed .

The state Commissioner of Police, Lanre Bankole said investigation into the incident has commenced ,saying, the masterminds of the act wouid be unveiled and arrested .

Why Fuel Scarcity Will Remain In Nigeria – PETROAN President