Scores of drug addicts and street urchings, popularly called Area boys and girls were on Wednesday, taken to the former president, Olusegun Obasanjo by a female talking drummer, Aralola Olumuyiwa for mentorship . 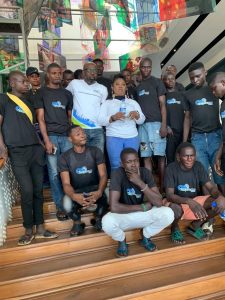 The street urchings who are now called street kings and queens were being rehabilitated under the ‘Eko Inspire Me Project’ of the female talking drummer.

Addressing the street kings and queens during the mentorship session, Obasanjo urged them to rediscover themselves using himself as an example, stating that he was once a prisoner but now at the top.

Addressing his guests and group of mentees the former president said there is need for ‘rehabilitation of the street urchins who are now called the street kings and queens.’

He admonished that before rehabilitation can be done, the street urchins must first have an open mind to see things differently and rediscover themselves.

The former president said, “God has not created them as street boys and street girls, that is the first thing to realise, secondly, as you have heard from them, they also know where something snapped in their lives and what went wrong. So the process of rediscovering themselves will start with themselves.”

“I was at a time, a prisoner and had faced many challenges in life before getting to the top.” Olusegun Obasanjo said to the urchins.

The uprising of street urchins, drug addicts, and illiterates, on the streets of Lagos, had motivated Ara to launch ‘Eko Inspire Me’ on October 19, 2022, to the world with an event that was held at the EbonyLife Place.

PLATFORM TIMES gathered that the idea was to to rehabilitate street urchings and make them responsible youths and citizens in the society.

It was also gathered that, Aralola through the support of the Lagos State Governor, Babajide Sanwo-Olu, introduced Eko Inspire me project to rehabilitate them and take them off the street.

Ara while speaking at the mentorship programme, said, “Gradually we hope that we will be able to take them off the street where they make money, we want to engage them and empower them.”

The street kings and queens who expressed joy over the training and mentoring session described the intervention as life changing, saying, “it is a turning point in our lives.”

A street queen who spoke to our correspondent said, “To me it’s a shock because I didn’t expect that in my life I will set my eyes on the former President, Obasanjo, it was a shock. In fact, taking pictures with him is a miracle.”

“All these rugged attitudes, atrocious attitudes will be stoked by God’s grace because with what I have seen here today, I am praying to God to answer my prayers so that I will see a helper,” added, a male street urchin who benefitted from the mentoring session in his amazement.

The beneficiaries had the opportunities of visiting the presidential library of the former president and boosting their knowledge about him and the issues surrounding Nigeria.