A transporter in Ogun state, Jimoh Lateef who was declared missing few days ago has been arrested by men of Ogun state police command after he was found at his girlfriend’s residence in Lagos. 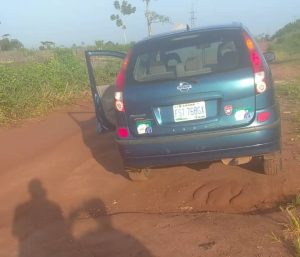 PLATFORM TIMES gathered that Lateef, a resident of Ijebu-Ode was declared missing on Sunday after his whereabouts were not known.

Lateef was subsequently apprehended by men of Ogun state police command for faking his kidnapping after he was traced to his girlfriend’s residence in Lagos .

Tension had run high on Sunday in the family when his private car was found near a bush in Ijebu-Ode while his whereabouts could not be ascertained.

The family had lodged the complaint to the police at Obalende divisional office of possible kidnapping of their breadwinner.

The family had told the police that at the early hour of Sunday November 13th 2022, Mr Jimoh lateef a.k.a Lateef naira went missing while he was coming from Ikangba to Imodi in his vehicle.

“But,unfortunately they didn’t see him but saw the vehicle with its doors opened and his phones intact while he was missing since yesterday, Sunday”.

The police were said to have visited the scene and took the car to their station.

According to a source, “Lateef after he was arrested claimed that he managed to escape, whereas his call log showed those he had been communicating with. He looked good and his phone battery was also full

He was arrested on Wednesday and has been detailed in police cell .