Residents of Imeko town in Imeko-Afon local government area of Ogun state trooped to the residence of the businessman, Segun Oparinde who was kidnapped by a gang of gunmen and held an emergency thanksgiving after he escaped from his abductors’ den less than 48 hours . 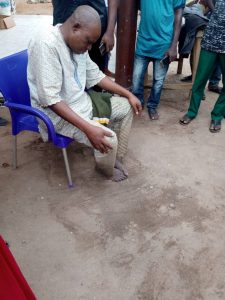 PLATFORM TIMES had exclusively reported that the unknown gunmen invaded Oparinde’s residence in Imeko town on Tuesday night around 11:30pm, and whisked him away .

The source had said that as soon as the gate was opened for him, the gunmen who had laid ambush for him emerged out of the hideouts and forcefully drove him away in his Mazda 626 .

The residents in tens trooped and hurriedly organised a Thanksgiving led by two Christian clerics .

PLATFORM TIMES saw the victim kneeling down before the Bishop of Ketu Diocese Methodist church Nigeria receiving prayers after his escape.
A family source told PLATFORM TIMES that Oparinde escaped through a particular village.

“They were four gang men. Two Fulanis, one Yoruba and one Edo man.”

” We thank the So-Safe Corps, the local security team, the Amotekun, the Police, DSS and the entire good people of Imeko –Afon local government. We seek more security attention by the government.”

The source further said “he is now at a private place for medical attention. It may be later.”

While speaking on the events that led to his escape , the source said “communal effort was the apparatus being used for his escape.

“So safe Corps, local security and hunters combed bushes and many traditional sacrifices and prayers were used.

“He had been taken to Abeokuta for medical attention.”

Confirming the incident , the Police Public Relations Officer in the state ,Abimbola Oyeyemi said the man has been rescued .

Oyeyemi said “he has been rescued, since the incident happened, the police have no rest3d.

“They have been on the trail of those kidnappers and the heat was so much on them that they were left with no more alternative than to push him out and up till now we are still on their trail because the victory is not enough because if we allow them to go scot free – like that, they will still come back to perpetrate their atrocities. So we are still after them and we will not rest until we get all of them arrested..”