ADVERTISEMENT
For years, the deplorable state of Adatan-Asero-Obantoko-Osiele road, which links Ogun state to Oyo state has  made life unbearable for the residents, commuters and traders. Most of these  users  of the  federal  road   have been forced to relocate to other neighbouring communities. 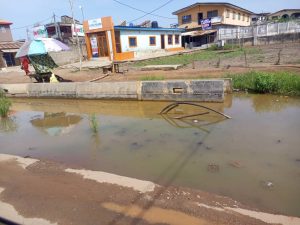 ADETUTU SOBOWALE  chronicles  the hardships  of the residents, communiters and traders plying the abandoned Asero-Obantoko-Osiele  road.

The busy road, known for endless gridlock, was constructed in the early 1970s and remained the main road that connects Ogun  with Oyo State from Abeokuta. 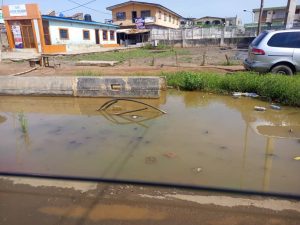 PLATFORM  TIMES gathered that a  year ago, the Ogun state government,  started the construction of drainages along the road with the hope of easing the woes of the commuters but the condition of the road remains deplorable.

PLATFORM TIMES’ investigation also reveals that the drainage construction was abandoned midway, adding to the hardships and sufferings of the residents.

When PLATFORM TIMES visited the place, residents of communities in Moore junction, Obantoko, Camp and Osiele, in the Odeda Local Government Area of Ogun State, expressed their frustration, lamenting the poor state of a road 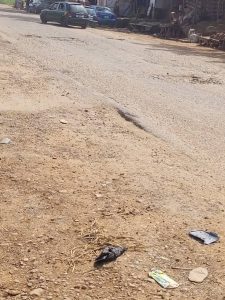 PLATFORM TIMES further  observed that the road becomes busy due  to the location of some federal institutions such as Federal University of Agriculture Abeokuta, Federal College of Education,Abeokuta; Police state Headquarters, Eleweran among others .

It was also observed that the bad portion of the  road from Ebenezer junction was filled with water, while vehicle owners struggled to avoid potholes on the road. 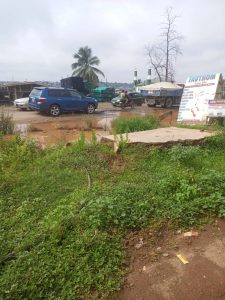 Many of the traders claimed that they  were running at loss as their customers have no access to their shops due to waterlog blocking roads leading to their shop.
Abiodun Govt. Destroyed The Road In The Name Of Repairing It.
The residents who spoke with PLATFORM TIMES lamented that the present government worsens the state of the road with the incomplete drainages constructed. 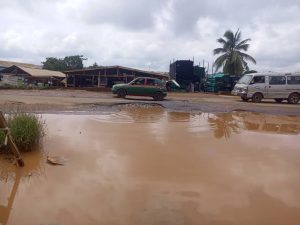 A resident laments saying, “this is the busiest road in Abeokuta. It has the highest rate of accidents, it spoils our vehicles the most, we are always disturbed by floods and we are faced with a lack of power supply.

“Even though there are four Federal parastatals  Federal College of Education, Osiele; Federal University of Agriculture, Alabata, Police Headquarters, Eleweran, and Ogun-Oshun River Basin) in the axis, we are challenged with bad roads 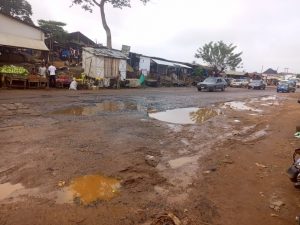 “This road is a Federal road but the Federal government is not ready to repair or reconstruct the road and likewise the state.

“The present government worsens the state of our roads with the incomplete drainage it  constructed along the road. It has added to our woes.

“The road has been marked as 10 Lanes but instead of doing the needful, they destroyed the road for us. When they were constructing the drainage, I was there when some of them that came from the ministry of works, then told them the structure of the drainage would not work for such a road 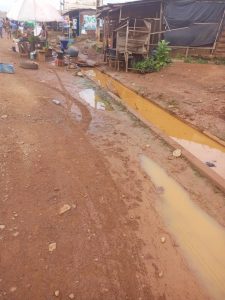 I told them they need to channel the water flow towards an existing stream at the other side of the road through a pipe that is close to the primary health center over there but it fell on deaf ears.

“To them, they believed they are experts and they know it all and disregarded my advice and here we are today bearing the brunt of their foolishness because they left the work uncompleted. They dug the drainage so deep that you can mistake it for a soak-away.

“The bad road is affecting us all, it affects our business, and also the residents have to ply the long route to get to their houses instead of coming through this route which is closest to their homes. This is frustrating and exhausting.

“What is left for the state government to get us is a canoe so that we can start living like those in the waterside area.

“This is intentional because they didn’t do what they did here in front of the Obantoko health primary center, instead they left the entrance untouched, why because they care less about the residents. They are cautious about how it will affect their properties and not the residents.

“The governor has even sent delegates to go  there to campaign about vaccination. Didn’t they see the state of this road? They did, but it’s none of their business. They care less about what the people go through. They are self-centered.”

We Spend A Lot Repairing Our Vehicles

Residents and motorists who spoke with PLATFORM TIMES noted that the state of the road had continuously increased the cost of repairing their vehicles.

A resident, Tunde Bethley, said,  “the road has spoilt  our cars and the expenses of repairing our cars are too much to bear. One of my vehicles was tolled to the mechanic three months ago due to the bad road. It has been there for three months now.

“This is unfair to us. They claim they want to relieve us but the reverse is the case. See the drainage they constructed, they didn’t let it through and that is the cause of this problem we are experiencing. They shouldn’t have started the work when they are not ready to complete it.

“They should have left it the way it was before now and that could have been better.

“All the people living in a particular house in this community have abandoned their houses here and relocated to somewhere else because going to work and coming back through this rad is too stressful for them. With that, the community won’t develop.

“We spend long hours in traffic just because of this road”

Bethley noted that despite paying tax to the government, communities have  continuously spent a lot to manage the bad roads in the areas.

“The communities have  spent a lot of money. They spend money everyday to fill the potholes but we can’t afford to repair the road.

“We can’t enter our houses on this road, we have to enter through a rather long distance.” He added 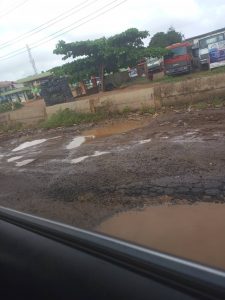 PLATFORM TIMES Investigation revealed that the bad road has claimed lots of lives according to the residents while many had lost their limbs.

Mrs. Bimpe Adekanbi, who spoke with PLATFORM TIMES noted that there have been several accidents due to the deplorable state of the road, adding that many have lost their lives while plying this road.

She emphasized that this affected the motorcyclists the most.

“There had been lots of accidents on this road. Many motorcyclists have lost either their legs or life on this bad road.

“Earlier this year, a trailer killed a motorcyclist and his passenger while dodging potholes along Asero- More junction road.

“Also, a man was knocked down from his motorcycle, very close to the Conoil filling station at Obantoko, while he was going home to his family.

“Likewise, about two weeks ago, three motorcyclists were run down by a car dodging this bad road. There are many more. These accidents could have been prevented if the road was in good shape.

“We are not safe. We are in danger because of this deplorable road. Whether it is a Federal road or not, the government should help and save us. They should do something before we are all killed.”

She added that a patient died while being rushed to another health center due to the traffic and the bad state of the road.

She said, “some time ago, a patient was referred to another health center from this primary health center here, but the ambulance was delayed because of traffic which was caused by bad roads.

“There was no way the driver could maneuver his way and pass through to save the patients life.

“It was the next day we learned that he died before getting to the hospital. He could have been saved if the road was good enough.

“The state of the road is affecting me a lot. My sales have gone down. I hardly make a profit from my roasted plantain business.

When PLATFORM TIMES visited the area, it was observed that business owners continue to count losses as the road remains in a bad state, and people hardly stop by the roadside to buy anything.

“I am fed up with the sale I’m making now. Customers that ought to patronize me can not come through because of the flooded road. Since they can’t come in through this route, they will rather buy whatever they want elsewhere.

“My goods are there with nobody to patronize me and they are expiring and I’m running at a loss.” A chemist, Mrs. Bisi Adekoya told PLATFORM TIMES

A taxi driver identified as Kolapo noted that the stress of plying Adatan- Obantoko road had increased transfer of aggression between taxi drivers and passengers noting that it is responsible for high cost of transportation.

He said, ” the stress we pass through daily is beginning to tell on us all. You will see taxi drivers and passengers fighting and insulting one another as a result of the bad state of the road.

“Drivers transfer aggression of the stress and cost of repairing our vehicles to the passengers. It is affecting our health. The government should come to our side.”

Speaking on the mental health road user in a  long traffic, the Secretary-General of the Association of Psychiatrists in Nigeria, Dr. Abayomi Olajide, noted that being stuck in frequent traffic for a long time could result in stress-related disorders and several psychiatric disorders.

“Frequent traffic jams could result in accumulated stress that may result in tension headache, fatigue, irritability etc; leading to physical and mental exhaustion!

In summary, being held up in a frequent traffic jam could affect one’s mental health if it persists for a prolonged period of time.