Pity is the word. For the people of Alagada village which hosts 15 communities in the Obafemi-Owode local government area of Ogun state, life is wicked.

In those communities, roads are not motorable, no water supply, security is almost nonexistent and the only school that caters to the 15 communities has become deplorable despite its proximity to Abeokuta, the state capital.

These communities cannot boast of one social amenity provided by both previous and current governments more than 10 years ago. The few ones provided have become deplorable.

Welcome to Alagada village where over 15 communities scramble for one primary school known as Obafemi-Owode Local Government Primary School, Alagada.

Parents and guardians enroll their wards in the only government-dilapidated primary school.

The school, which came into existence during the administration of the former Governor of Ogun state, Otunba Gbenga Daniel, has not only been in deplorable condition for over 10 years, but a death trap, leaving teachers with no other option than to move the pupils into a church in the area to take classes.

PLATFORM TIMES gathered that anytime it was about rain, palpable fear grips parents who reportedly ran helter-skelter to get their children out of the dilapidated building. 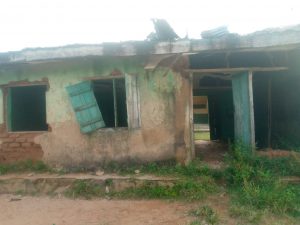 Findings revealed that only five teachers were on the ground to teach the pupils from primary one to primary six.

It was gathered that from the Parents Teachers Association, the parents had no choice except to hire more teachers for the school to ease the work for the teachers following the failure of the government to provide adequate teachers.

Visiting the communities, it was observed that residents and parents have lost hope in giving their wards quality education from both public and private schools.

The alternative school to the government’s school, private schools is said to be suffering from the same challenges.

Residents who spoke with PLATFORM TIMES catalogued their challenges which include the poor state of the road which leads to the Oba correctional facility.

A resident, Chief Mrs Adunni Adebayo, who is a member of the Community Development Association in the area, explained how politicians have promised the community to rehabilitate the school and failed to keep their promises, stressing that the community has written many letters to the government without getting response.

“We want the government to help us reconstruct it because the school has been in this state for a very long time, at least, 10 years.

“Even, this new one that they’re using, it was done during Daniel’s era, they only patched it, they didn’t do it very well, and the teachers that are there, they’ve tried their best also, but its still in the same state”.

The resident said one of the structures was demolished by a senatorial candidate who promised to help reconstruct it.

She said the project was halted when the man refused to pay the Baale after supplying blocks and water for the construction.

Adebayo said “ he met with the Baale, and he bought the block from him, and every other thing, but the Baale wasn’t paid, even those that fetched water were not paid, before left again, and it was abandoned again.

“And we tried to beg them to even reconstruct the one that is dilapidated because we are very scared because students and others in the community go there to play in the evening, though, nothing of such has happened, and we pray we don’t see such.”

Another resident, Eniolorunmo, who has three kids in the school lamented the looming danger that might happen if the school structure remains in the same state, stressing that the school is just an ordinary wall.

He said, “As the school is there, it’s for the benefits of everyone in the communities, so it’s very dangerous for students that play around the place. Because, it’s just an ordinary wall, it’s not built with block.”

“The school has been in that state for more than five years. The school now uses church, which is not proper, but since it is free, we have no choice.” 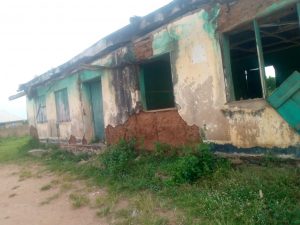 “Why the Pupils Were Moved To The Church”

Describing the worse state of the school, Alade Ganiu said teachers usually go through stress whenever it was about rains.

He said, “even sometimes, teachers take the pupils from one place to the other whenever there’s breeze or rain, and it got to a stage that they couldn’t use the place again, so, that was when we asked for the church, and they gave us.”

“The teachers run helter-skelter whenever there’s a sign that some parts of the building are about to collapse. The church gave them the space for free, and they don’t disturb the students with their programmes, but, yet, the government should help, because the building was built with ordinary clay soil, and can fall anytime.”

Confirming this, the daughter of the former Baale of Alagada, Mrs. Odeobi said the communities had not recorded any tragedy from the dilapidated building.

She explained that the children were moved to the Redeemed church for class to avoid tragedy.

According to her, the government is unaware of the situation of the school, because, if they know, they ought to have helped us, since it’s a government school.

“The church is not collecting anything from the school, since some teachers are members of the church, but It’s not alright as they use church.

“Parents are lamenting that, the school is not in a good state, yet they’re paying, as there’s no difference between it and a private owned school.”

We Are Always Scared Whenever It Rains – Parents

While narrating how she feels whenever it rains, Adebola Ojebiyi said, “We are always scared when it rains, because of the wind, even some parents ran to school to pick up their children.

“It happened a day when the wind was strong, my brother’s wife ran to the school because she has five kids there, but on getting there, the teachers had taken care of them.

“There is no way rain would fall, and we won’t be scared, even someone that has no child there is always fear.

Muftau Ayinde in his reaction, narrated that the students had to pay N1,500 every term to hire teachers, saying there are no more than three teachers deployed by government in the school.

He said, “the school has been like that for a very long time, it’s more than six years, the wall has a lot of cracks, even there are not enough teachers there.

“We the PTA members were the ones that hired two teachers , apart from government workers, and the government doesn’t know about it.

“Because, only a teacher was teaching more than three classes, and it would be tough for them, that was why we hired new teachers.

“So now, per term, every student would pay N1500, that is N500 every month. So we use the money to pay the teachers we hired, but their money is not as much as the government staff workers, as we don’t know how much they’re collecting as salary.”

Akeem Sulola, who has lived for over 20 years in the community lamented the bad state of the road leading to the Oba correctional facility.

Sulola who has two children spends N500 for their fare everyday to school, stressing that it would have been better if there is a government secondary school in the community. 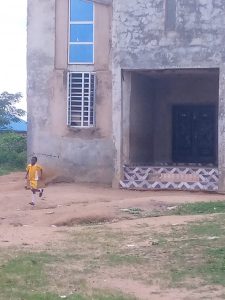 The baale of Alagada, Chief Surajudeen Salisu, therefore called for the government’s intervention, saying, receiving lessons in a church is not proper.

He said, “We need many things but what’s important is the school of Megie Alagada. The state of the school is pitiable, and we are even urging the government to come and pull it down to avert an accident.

“Since the classes cannot accommodate all of them, some students now receive lessons inside a church. And this is supposed not to be.”

“We’ve appealed to the government and are still appealing that they should help us.

“Our roads are in a deplorable state and this is a concern to us because it’s difficult to transport farm produce.