Sorrow and sadness rented the air on Tuesday at 74, Fidipote Street, Off Italapo, Ijebu-ode, Ogun state, the operation base of a fake Loan Company after it fled with millions of naira deposited by many traders.

PLATFORM TIMES gathered that many depositors woke up on Tuesday and discovered that the door to the office of the loan company  was under lock and key. And  after forcing it opened , there was no longer any sign of operation in the office . 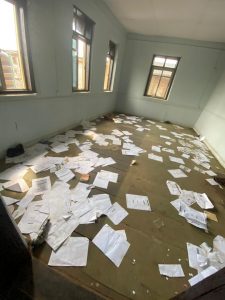 PLATFORM TIMES further learnt that scores of residents of Ogun state have been duped of their hard earned money running into millions of naira.

Grief, shock and shattered hopes forced tears down the victims’ eyes who include aged widows, market women and other traders when they found out that the officials of APEX VINTAGE LIMITED office have fled with their money .

Some residents who spoke with PLATFORM TIMES said harsh economic condition led hundreds of the victims into the slimy hands of suspected fraudsters who disguised as a financial institution to issue financial and food support system, PLATFORM TIMES reports.

PLATFORM TIMES gathered that Ina bid not to be starved to death, the victims in Ijebu-ode became host to money sucking parasite, identified as APEX VINTAGE LIMITED.

Less than a month after the inception of the financial institution in the community, report has it that the company has folded up into thin air with millions of Naira, without leaving traces of their whereabouts. 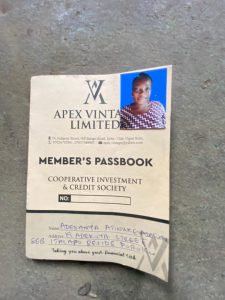 This, coming after the unsuspecting people of Ijebu Ode had reportedly deposited their life savings in the institution with hopes that it would morph into loan issuance, food support programme and even an upscale into special packages as offered by the instruction, has devastated the already harsh economy for the people.

Traders, widows and aged were major victims in the fraud that claimed several millions of Naira at the APEX VINTAGE LIMITED, located at 74 Fidipote street off Italapo, Ijebu-Ode.

Taken Awol by the gimmicks of the cooperative and credit society, the victims who went rolling in tears exposed that they had deposited their savings with hopes that they would be issued loans and gain access to food support programmes.

Recounting her ordeal, an aged widow said the financial institution claimed to help them with foodstuff after weeks of daily payment. 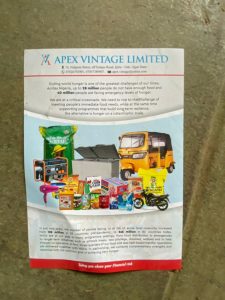 She lamented that all her savings were put into the scheme, all in the name of getting something to eat.

PLATFORM TIMES investigation found out that the unsuspecting people had been lured with mouth watering offers to win their attention and deceive them into buying into the fraud plan. 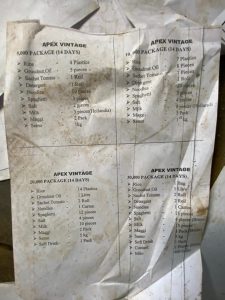 It was observed that the food support programme was splited into four different packages; N5,000, N10,000, N20,000 and N30,000 packages respectively, of which each package has an added advantage over the previous.

The said institution, APEX VINTAGE LIMITED, which claimed to be a coorperative Investment and credit society had strategically planned and executed it’s looting.

Well designed company logo, name, location and email address which corroborate it’s vision and mission of defrauding and exploitation of the people’s weaknesses.

A society that is meant to be a cooperative society, in which revenue from cooperate entities would be invested into something they believe in its ability to multiply and constantly yield profit from it’s appreciation for the cooperated entities.

In addition to it’s cooperative Investment scheme was the fascinating credit offers in form of loan issuance which practically attracted the gullible market men and women, widows, pensioners, aged and young, amongst others.

With claims and promises that after saving up to a certain amount of money with an initial amount deposit during account creation, the financially average people would have a breakthrough from the financial burden which had been threatening their businesses and cost of living.

It has thus, been established that the promises are lies, and the figures are deceiving. The proliferation of variety credit society establishments in the country may lead to more victimisation of unsuspecting citizens.

In one of their fliers, bearing pictures of tricycle (Keke Napep), generator, bag of rice, motorcycle (okada), refrigerator, bag of semovita amongst many other items, the institution carefully captures statistics of word hunger and food distribution challenges.

The fliers reads: “Ending world hunger is one of the greatest challenges of our times. Across Nigeria, up to 28 million people do not have enough food and 10 million people are facing emergency levels of hunger. We are at a critical crossroad. We need to rise to the challenge of meeting people’s immediate food needs, while at the same time, supporting programmes that build long-term resilience, the alternative is hunger on a catastrophe scale.

“In just two years, the number of people facing or at risk of acute food insecurity increased from 135 million in 53 countries pre-pandemic, to 345 million in 82 countries today.

“NGO’s are at our side in many programmes, from fod distribution in emergencies to longer term initiatives such as schools meal, less provide, disabled, widows and to help through coorperative.

“In fact, the quarters of our food and less cash-based transfer operations are delivered together with NGOs. In partnership, we combine complimentary strengths and expertise with the common goal of achieving zero hunger.”

On Wednesday Morning, anxiety filled the air as the firm’s office remained locked. The pandemonium that followed led to the forceful opening of the door, unveiling nothing but publicity papers, record books, sheets of papers, cards and more rough sheets.

The sudden disappearance of the financial institution after such a short time of operation unveiled the eyes of the clients who had registered with them.

It was gathered that all the company’s contact and emial addresses stopped operating and no staff of the firm was reachable at the time of filing this report.

PLATFORM TIMES observed that the website had been down and inactice since Friday, 17th November.

Upon discovery that the firm had carted away with their savings with promises unkept, a source told PLATFORM TIMES that the distraught victims reported the case to the Obalende Police Division.

However, at the time of filing this report, the Ogun State Police Public Relations Officer, SP Abimbola Oyeyemi, said that he had yet to get the detail of the incident.