… They will be repatriated this week -Immigration

The Nigeria Immigration (NIS) has busted a gang of Chadians and Togolese hibernating in some two locations in Odeda local government area of Ogun state . 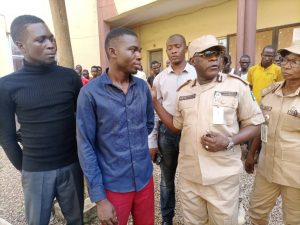 The suspects who were described as security threats were arrested around Somorin in Obantoko near Abeokuta, the state capital .

The arrest was carried out last week Wednesday after some weeks of surveillance and intelligence by officials of Nigeria Immigration Service ,Ogun state command .

PLATFORM TIMES gathered that the Chad and Togolese nationals sneaked into the country without valid travel document and had been living withing the state for weeks before the NIS officials were hinted of their presence . 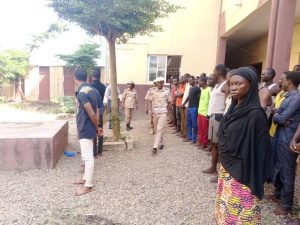 PLATFORM TIMES further gathered that 32 Chadians who were between the age brackets of 22 and 30 had no source of income and could not speak any other language except french.

It was however gathered that apart from the Togolese, one other could speak in English language .

Parading the suspects ,the Comptroller of Nigeria Immigration, Yakubu Jibril noted that the suspects are a security threat to Nigeria, saying, they do not have any valid business with no sign of livelihood.

Jibril said “The irregular immigrants are a security threat to Nigeria because they have no documents to be in Nigeria and they have no sign of livelihood.

“We are charging Nigerians to be watchful and not to be deceived by these people who lure them into unidentifiable businesses with imaginary profits.” 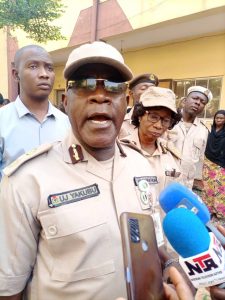 He said the nationals were arrested following a complaint by residents, who reported that some nationals who could only communicate in the french language had migrated to their community.

The NIS boss added that upon the information, transmigration surveyed the location for days which led to the arrest of the suspects.

He added that the investigation revealed that the suspects were engaging in an illegal networking business, adding that it poses a security threat to the country.

He said, “We were alerted by residents of the presence of some nationals who could only communicate in the french language.

“We went for surveillance for some days to confirm the authenticity of the information from the residents.

“Luckily for us, on Wednesday, we struck at the two locations that were assumed to be occupied by these nationals, and we were able to apprehend 33 of them.

“On interrogation, we discovered that 32 of them are Chadian nationals while only one is a Togolese.

“The 32 suspects from Chad said they were invited by the Togolese to do a networking business that involves registration and payment of a certain amount of money.

“According to them, their accounts will be funded every week.

“When interrogated, the Togolese who invited the 32 Chadians, had no specific business to show.”

The controller however said the suspects would be repatriated beck to their country this week .

NGO Drags Abiodun, 6 Others To Court Over Revenue Outsourcing