Nigerian foremost realtor, Dr. Babatunde Adeyemo, on Wednesday revealed that some of the foundations of what he has become today in the nation’s real estate sector were laid over two decades ago.

Describing that house as a stepping stone, the reator said he elected to make it a quiet affair since then until now because he did not see it as a luxury but as a foundation towards self sustainability, psychological balancing and economic growth. 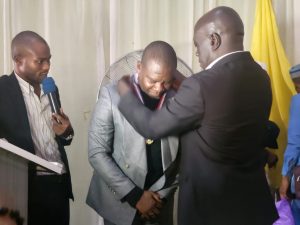 “My aim is to set up my own company. Building a house was a way of trying to avoid distraction of house rent and landlord issues and not having a stable mind, home and mentality to achieve my over all objectives. That house at 26, was just like a stepping stone,” he said.

He spoke to Platform  Times shortly after he unveiled a ‘Quarterly Anti – Corruption Report On Nigeria’ at an Anti – corruption sensitization programme in Abeokuta, the Ogun state capital, where he also donated the sum of N200,000:00k to aid free distribution of the anti corruption book to all tertiary institutions in Ogun State.

The 74 – page journal was published by a
retired ICPC Commissioner for Ogun, Oyo, Edo and Delta States, Mr. Olukile Olusesan, and launched at Iweiroyin Press Centre, Abeokuta at event organised by a anti – corruption group – Organisation of People’s Voice, during which about a score of notable Nigerians, including Dr. Babatunde Adeyemo himself, Dimeji Kayode – Adedeji of the Penpushing media, former state chairman of Peoples Democratic Party(PDP), Elder Joju Fadairo, retired Head of service in Ogun State Mrs. Amope shokur where recognised and inaugurated as Anti – Corruption Ambassadors by the group.

The real estate firm – Pelican Valley Nigeria Ltd, also bagged an ‘Integrity First Initiative Award’ bestowed on her by the group in “recognition of its adherence to integrity first and contonous practices of integrity in the discharge of the organisation’s functions.”

Adeyemo noted that Nigeria needed hope and people who could help change the narrative, saying things would get better if Nigerians imbibe the spirit of integrity in every of their endeavours and live a corruption – free life.

He said this informed why he donated money in support of free distribution of
the ‘Quarterly Anti – Corruption Report On Nigeria’ in all tertiary institutions in the Gateway State.

“Secondary this award is a lot to me. The high point of it is the unveiling of the ‘Quarterly Anti – Corruption Report On Nigeria’ written by no one but an oncurruptible retired ICPC Commissioner in charge of Ogun, Oyo, Edo and Delta by erudite person, Mr Olusesan Olukile.

“And the unveiling the book meant a lot to me and the Pelican Valley because the task was given to who deserved it. I made it clear to the media that Pelican Valley has been operating her business in the last 10 years without a single litigation, without dispute. I have never been to a police station, I don’t know any DPO. It shows we are doing it the way it should be done.

“Although, it comes with one or two challenges. You know Nigerians are like Oliver Twist. My wife sent something to me yesterday on social media showing a given state government was doing real estate programme and people were coming out to challenge some people for buying property from them but did not get any allocation. It is very very unfortunate.

“We as real estate company we hold dear to our heart our guiding principles, that is integrity first. When someone buys land from us, we get you allocation within the next 24 hours because before we sell our land, we would have done the necessary things we are supposed to do. Things that could create bottlenecks and disturb people from getting allocation we will first address them. That is why Ogun State Government has been referring to Pelican Valley Nigeria Ltd and me personally as the Poster boy of real estate in the state.

I always believe that whatever you are doing, you are doing it for yourself, because you will surely reap what you are doing. All our performance and the accolades we are getting are not flukes. I just have to blow my trumpet now because I just have to say it so that people can learn because they didn’t come cheaply, it wasn’t served alar carte. I have been preparing for it for over 15 years.

“I’m Babatunde Adeyemo, the CEO of Pelican Valley Nigeria Ltd and that is all what people can know but so many people will not know that I built my first house when I was barely 26 years and I have been a millionaire at 26 quietly. The reason why it was quiet is because building a house I did not see it as a luxury but I saw it as a foundation towards self sustainability and economic growth. My aim is to set up my own company. Building a house was a way of trying to avoid distraction of house rent and landlord issues and not having a stable mind mentally, to achieve my over all objectives. That house at 26, was just like a stepping stone.”

Olusesan said that corruption in the country has become an amoeba with emerging variants that have equally defied all counter measures set against it. 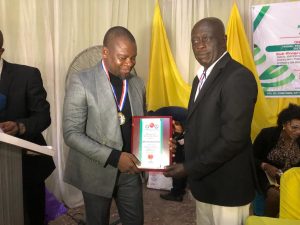 The author and publisher lamented that some executive and executive related corruption and corrupt practices in the country with an insignia, ‘ touch not my annointed,’ were hindering or stymieing the efforts of the nation’s anti – agencies and their operatives at arresting the socioeconomic vice.

He said, “The festering of corruption poignantly seems as if the anti – corruption agencies are not effective.

“I stand to tell you that some of the anti – corruption agencies, most importantly ICPC, EFCC, and NFIU have established their capacity in the fight against corruption with remarkable achievements. This menace called corruption only remains amoebic with emerging variants defying all counter measures set against it.

“One of the emerging mystical variants is the metamorphosis of human beings into snakes and other animals to swallow naira notes. There are executive and executive related corruption and corrupt practices with insignia, ‘ touch not my anointed.”

According to him, the purpose of the quarterly anti – corruption report on Nigeria’ is to robustly review the activities of all anti – corruption agencies and Nigerian government every quarter in terms of their goals, progress among other considerations.