An agency of Gov Seyi Makinde-led Oyo State government recently rebutted a published investigative report on the failure of his administration to flood the metropolis with his stress-free commuting scheme via provision of 106 long buses to ease the daily horrors residents endure in getting transported to various destinations. To double-check the government’s claims of having the buses in every areas of the state, Investigative Reporter, OLUWATOBI ODEYINKA, spent another two weeks verifying if the buses are actually everywhere in the state. His findings reveal that two years after the pledge was made, and contracts awarded, residents’ hopes remain dashed as thousands of road users continue to face untold hardship in accessing the long buses to ease their transportation hurdles in Ibadan.

DAILY commuting to office has become nightmarish for Abdulqudus Tajudeen, a resident of Akinyele, in Ibadan North local government area, some kilometres from the popular Moniya Bus stop.

Tajudeen, who works as a sales attendant in Akobo, spends roughly N1000 every day on his return trip, an expenditure stretching his below N50,000 monthly incomes. Coupled with the daily spending is the long hours he spends queuing at various bus stops to get to work.

His frustration is even compounded by the fact that he is not able to join any of the long buses. So, he’s compelled to joining private cabs to Iwo road daily after staying about an hour at the bus stop.

He said: “To hop on bikes, I would be spending more whereas the tougher challenge of getting their long bus to Akobo from Iwo road is so terrible.”

Back in 2020, Gov. Seyi Makinde had dangled light traffic hopes promising to reduce the daily stress endured by commuters in the state. To effect this, he pledged to purchase and deploy 106 long buses to the roads. So, residents look forward to being conveyed to their destinations at subsidized fares.

Even the state Commissioner for Information, Dr. Wasiu Olatunbosun, corroborated his boss’ claims as he announced the award of N9.3 billion contract to Petrobridge Nigeria Limited for the procurement of 106 buses just as the government also promised to build four new bus terminals at Ojoo, Iwo road, Challenge, and New Ife road all within the state.

In an earlier published investigative report, it was found that many of the buses were nowhere to be found in the metropolis as claimed by the government, while residents and commuters toil daily round the state.

Similarly, the reporter found that the contract worth N9.3 billion for 106 buses was inflated as they were purchased at lesser than the amount quoted by the government. And when contacted, the state transport ministry told the reporter that it had no knowledge of the procurement process; whilst the Chief Press Secretary to the governor, Taiwo Adisa, had told the reporter to contact the mentioned transport.

The earlier report also noted as found that the government hid all documents on the buses’ procurement from the public, and even the Freedom of Information request submitted by the reporter was blatantly disregarded and not replied to till date.

Pressing further for information, the General Manager, Pacesetters Transport Service (PSTS), Wole Akinleye, told the reporter that the agency had so far received seventy-five units of buses but could not tell when the remaining thirty-one will be supplied; yet those buses plying the state a just a handful contrary to the GM’s claims.

However, a source in the agency told this reporter that only fifty-six buses have been supplied, but in contrast, the reporter could not find any of the buses on Ibadan roads.

In his reaction to the earlier published investigative report, Wole Akinleye, PSTS’ GM, printed a rebuttal dismissing it as “a figment of the writer’s imagination”. He posited that the buses are all over Ibadan, at a subsidized fare of N100.

Only Few Long Buses in Ibadan Not Entire State

TO ascertain the PTS GM’s claims, a second reporter was assigned to tour the city to assess the distribution of the supposed 106 long buses. Just as the first reporter, the second journalist also found that the vehicles are largely unavailable on majority of the roads. His findings show that Oyo government agency’s claims are incorrect as the buses are only available in one route of less than 20 kilometres in the city.

Only three of the buses shuttle between Challenge and Ojoo, traversing and picking passengers along Adeoyo, Shoprite, Dugbe, Mokola, Sango, University of Ibadan in the 20 kilometer ride. Passengers plying the long buses pay N200 fare from Challenge to Ojoo and vice versa, while those debarking around Mokola pay N100. That’s the only aspect commuters using the long buses describe as a huge relief admitting they would have paid triple the fare for private cabs. 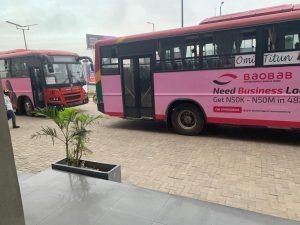 This reporter was able to ascertain that only one bus is made available to passengers at the Obafemi Awolowo train station in Moniya as it shuttles passengers between the train station and Dugbe based on its schedules. The fare is N400. 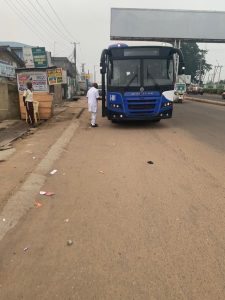 Further investigations also show that the government’s subsidized and stress-free transportation scheme is not widely spread across the city as many of the buses are not plying major roads and packs such as: Iwo road, Beere-Bodija, Dugbe to Apata, Ologuneru, Eleyele, among others. 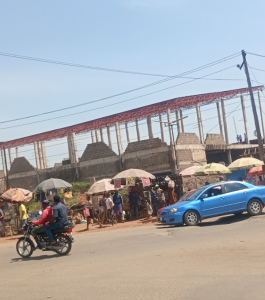 As this reporter monitored happenings at Iwo road junction to see any if the long buses might come around for passengers; he witnessed first-hand, a transport-induced madness by residents trying to get to their destinations. Right at the complex roundabout at the junction linking Lagos-Ibadan expressway to Ojoo, Old Ife road, and the Ibadan-Abeokuta road; the sudden commotion displayed by passengers as they rushed to join any other vehicle that comes around to meet up their day’s target schedules, leaves him wondering in awe.

Of the four bus terminals promised, only two have been completed, Ojoo and Challenge, while the other two, Iwo road and New Ife road, are clearly abandoned as investigation reveals. 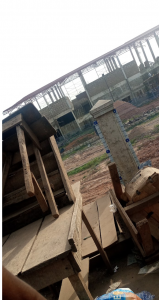 Some Ibadan residents told this reporter that Iwo road in particular is a strategic bus stop for them. They said that’s why the non-completion of its terminal is the reason government did not deploy buses to the roads linking the junction.

Sellers at the corridor of the abandoned terminal said workers were there earlier this year, but no major work was seen to have been done.

Residents at Iwo road junction told the reporter that the Makinde government needs to explain to them on why there’s huge disparity between the 106 number of buses promised and the few plying the roads, whereas the budget had been cashed out.

WHEN this reporter called Mr. Wole Akinleye, the General Manager, Pacesetters Bus Transit (PSTS), the government-owned transit company for his official comments on the observed disparity by the residents, he bluntly said he had nothing to say on the procurement of buses.

Pressed further, he told this reporter to write the Bureau of Public Procurement at the governor’s office.

Also asked to speak on the operation of the buses as head of the PSTS, he declined saying “I don’t want to speak with you. I don’t even know you”, and he hung up.

Then, on the morning of the following Sunday, this reporter visited the PSTS office in Eleyele, hoping to sneak in to count the number of buses in the compound. Entry into the premises on work days has been tricky, hence the resolve to go on a Sunday.

However, few minutes after entering the premises, he was challenged by one of the security guards for wondering. But the reporter gave the excuse that he was waiting for an official who was also on his way out.

Within the few minutes of being engaged with the security personnel, the reporter scanned the PSTS premises, and counted about 50 new buses, and ten of the old buses from the previous government. But none of these buses are part of those seen on the roads as they are without plate numbers.

Denied audience by the PSTS GM, this reporter contacted the Commissioner for Works and Transportation, Mr. Daud Sangodoyin. But he wasn’t the one that answered the call. But the person on the other line simply told the reporter: “You have to go and speak with the Chairman (not general manager), of the Pacesetters Transport Company”, and he too, cut the line.

This report is supported by John D. and Catherine T. MacArthur Foundation and the International Centre for Investigative Reporting, The ICIR.