Hundreds of motorists were stranded on Saturday in some parts of Abeokuta when armed men who are followers of Yoruba agitator ,Sunday Adeyemi, popularly known as Sunday Ignoho blocked the major roads in the state capital including Kuto road . 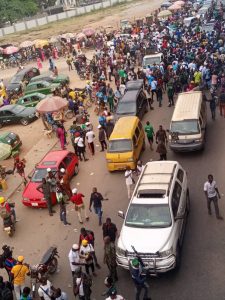 The Igboho’s boys who were armed with local charms and other dangerous weapons including guns, had a stop-over at Kuto under bridge which made some travelers stranded for hours .

One of the agitators while addressing the gathering ,declared that they were determined to achieve the much-touted Yoruba nation . 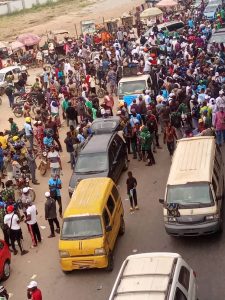 There was anxiety when some members of the group started sporadic shooting into the air .

The spokesperson had to caution them to save the bullets for the main assignment which he explained as theri struggle to achieve Yoruba nation.

He said ” we have it in abundance. But, do not waste it . We made efforts to get them ,we could not get enough, but, the ones we got are many .

“I will advise that, you do not waste it. We are followers of our leader , Chief Sunday Igboho .We must achieve our Yoruba nation.”

PLATFORM TIMES who monitored the situation observed that the armed men had a field day displaying their weapons without any security men on ground .

Some witnesses who spoke on the implication of the development, expressed fear over the state of insecurity in the country .

A trader who simply identified as Bayo, said he had to hurriedly pack all his wares to avoid being caught up in the possible violence .

Another person who expressed his views said “these boys may turn to kidnapers after they could not achieve their goal on Yoruba nation. These weapons they have may tempt them to involve in armed robbery .”

Many travellers except those who plied the overhead bridge were stranded for hours .