…Allegations Against Me, Unfair -Iyeru

The Road Transport Employers Association of Nigeria, Ogun state, has raised the alarm that the peaceful atmosphere being enjoyed in the state may be truncated following a planned bloody violence at parks and garages in some parts of the state .

The Secretary of RTEAN in the state, Tiwalade Akingbade raised the alarm on Friday during a press briefing held in Abeokuta. 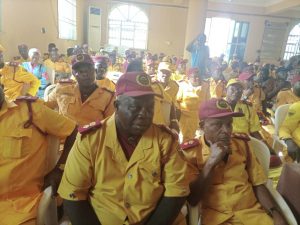 The RTEAN said there might likely be a bloody violence next week following the threat by the chairman,Ogun state Parks Management, Akeem Bodurin .

Akingabde said Bodunrin went to parks and garages in Kuto and Ita-Oshin in the state and threatened their members of violence next week . 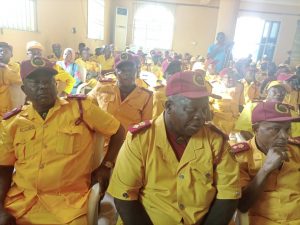 He said the peaceful atmosphere in the state had been truncated following the violence that broke out a few days ago leaving six people with various degrees of gun injuries including the RTEAN Chairman .

Akingbade said the threat which is contrary to the government’s policy of one-week work, one-week rest is capable of turning the state into a theatre of war if nothing is done to it .

He said ” three days ago, Mr. Akeem Bodunrin a.k.a. lyeru led members of his OGSPAM to attack our State Chairman, Comrade Akibu Titilayo, a.k.a Efele while in the company of the State governor at the palace of Olu of Itori, Oba AbdulFatai Akorede Akamo.

“Many of our members who accompanied our State Chairman, Efele received various degree of injuries from guns to matchet attacks. Gunshots were fired directly at Comrade Akibu Titilayo who escaped by whisker.

“Mr. Akeem Bodunrin alias lyeru has been issuing threats to take over all parks and garages in the State from members of RTEAN during our one-week work that would be due from January 2, 2023.

“This is the import of this press conference. We are informing all the security agencies, the police, DSS, NSCDC, Amotekun, So-Safe and others, the State government and the general public that we, at the Road Transport Employers’ Association of Nigeria, RTEAN, would not it idly, fold our arms and receive violent attacks from lyeru’s thugs and hooligans.

He denied knowledge of the creation of any other union led by Yaro, saying “I am not aware of any new union created by government in Ogun.

He described the allegation against the OGPAM chairman as unfair .

Speaking through his Vice Chairman, Jimoh Olatunbosun Ajagbe, Iyeru said the clash at Itori had nothing to do with him, saying he was never in possession of any gun, let alone shooting anybody.

According to him, the OGSPAM under his watch is in control of all parks and garages in Ogun already, wondering why he would be threatening to take over what already belongs to him.

“How will you be stealing your own food?” he queried.

He said “I don’t know what they want to gain by using these very strong allegations against him, it’s not fair.

“The point is that, Alhaji Akeem Iyeru has been given the park management by Ogun state governor, so, which part does he want to take over? He cannot take over anything that belongs to him, the power of management belongs to Alhaji Iyeru, nothing like such.”

When contacted the Police Public Relations Officer in the state, SP, Abimbola Oyeyemi confirmed the threat .

Oyeyemi vowed that the police command would deal with anyone that causes violence in the state .

He also revealed that investigation was ongoing over the shooting at a public function attended by the governor where six persons were hospitalised.

He said “we will not ask people not to cause problem, but, whoever causes problem, should be ready for the consequence or consequences. So, we are also ready for anybody who wants to cause trouble, we will not fold our hands while some people will be throwing the state into pandemonium, it will not happen and we have commenced investigation into the incident that happened in Itori.

“Anyone that is found culpable on that incident will be made to face the full weight of the law.

“So, whoever that is threatening to cause violence,or whoever has the intention of causing any violence in the state ,will be made to face the full weight of the law no matter the status of that person, no matter how high placed the person might be, so, whoever that wants to cause trouble should think twice because, such a person will have us to contend with,we are not leaving any stone unturned.

“Whoever, regardless of who the person might be,will see the other side of the law.”