Ahead of the 2023 general elections, 17 political parties deregistered by the Independent National Electoral Commission, on Tuesday, collapsed their political structures into the Peoples Democratic Party (PDP) in Ogun State. 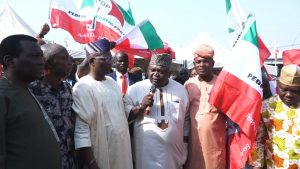 The parties which include ; National Conscience Party, Progressive Democratic Movement ; Boot Party and Nigerian Peoples Party met at the PDP secretariat in Abeokuta and announced the collapse of their structures into the PDP.

Speaking on behalf of other parties, the National Secretary of National Conscience Party, Biola Lawal said the 17 deregistered political parties decided to support the governorship ambition of Ladi Adebutu in the coming election

Lawal claimed that, the APC government has failed to create a meeting point between the masses and the political class, stressing that, only the masses suffer the economic woes .

Adebutu in his remarks assured them that if elected, his administration would embark on masses oriented programmes that will benefit the general public.

Adebutu, however, called on the federal government to subject political office holders and those seeking to hold public offices to drug test to have moral society.

He argued that, there are some political office holders with drug abuse tendencies, thereby, influencing their public misdemeanor.

“We have people of well thoughts and struggle at what we do, it is not easy to hijack power from people in government, that is why they are destroying our campaign billboards.

“By next week, we will start our campaign, next week, we will bring out their scorecards, next week we will tell them the proper taste to the drug abuse. When you have a leader with questionable characters, we must send them to a psychiatric hospital for drug abuse test. Because when they abuse drug substances, they come to the public view and start to misbehave and mismanage the resources.

“I can assure you that, if we must move the country forward, what should be our requirements is to ask people in high places to undergo drug abuse test, with that, we will have a better nation.

“If not abuse of drug substances, these people will not behave the way they are behaving now. They won’t take money that was meant for hospital development and embezzled them, thinking people will not talk.”

We 'Re Marginalised In Ogun - Physically Challenged People