People living with disability in Ogun state have lamented that they have been marginalised in the state . 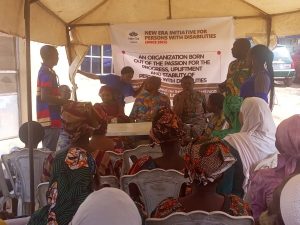 The PLWD said life has not been easy for them, due to the failure of the state government to implement the disability law .

They however appealled to the state governor, Dapo Abiodun for the implementation of disability law to solve their challenges in the state.

The PLWD complained that the law was passed since 2017, but, it’s non implementation has compounded their challenges and fueled alleged marginalisation in the state .

Addressing colleagues in Abeokuta, on Tuesday, during an empowerment programme organised by a Non Governmental Organisation, New Era Initiative, the President, Adekunle Adeyinka lamented that the PLWD were not feeling the presence of Ogun state government compare to other state .

He said the organisation decided to take care of some people living with disability as part of the celebration of the season .

He said “in terms of infrastructural incentives, even, job to our people and better life , we are being marginalised.

” We fought for the law during the past government of Senator Ibikunle Amosun, he told us that the law has been attended to, but, no implementation, nothing whatsoever .

“Disability law, thy is where we have our freedom of work , access to any public place like banks. These are not accessible to people with the wheel chair and people using crutches and offices and stalls, so many places in the state ,you cannot access them and it is not supposed to be like that .

“If they have followed what is in the law , everything including stall, mall, offices and what a view, even, personal building, even, to have a ram for those ones with wheel chairs will be accessible.

“Even, our roads, look at the roads they are building , the people display their wares on the walkway ,so, you don’t have free movement and It is not out of place if we have a special bus for the special people, all these are what our colleagues are enjoying outside the state.

“The ability to absorb us into work force, we have so many learned people ,we have lawyers ,teachers and what a view they are roaming about at home .

“All these I have enumerated are our demands . They should make life better for us.”

Speaking on the essence of the empowerment, Adeyinka said that it is a strategy to eradicate sadness and financial instability among people living with disability during the festive period.

He said, “we are giving out food items to the less privileged amongst us to put smiles on their faces for the yuletide period.

“It is an initiative that has been in existence for a long time but it’s unfolding this year. We know there are people with disability that can not afford three square meals and the goodies of life.

“So, we thought of looking out for those groups of people to put succor and smile on their faces.