.. I ‘M Not In Competition With Obj-Daniel

Two political leaders in Nigeria, former president ,Chief Olusegun Obasanjo and former governor of Ogun state,Otunba Gbenga Daniel displayed love to each other to round off the 2022

This happened a few hours to the end of 2022 at the premises of the OOPL ,Abeokuta during the
inauguration of water supply scheme . 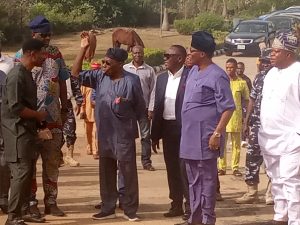 Speaking shortly after the commissioning, Obasanjo said water and electricity supplies are two major challenges confroting investors in Nigeria, particularly, hospitality industry in which he and Daniel were involved

He said OOPL and Conference Hotel, had earlier struck a deal on power supply through Solar Power facilities at the OOPL.

advised Nigerians to do everything possible to create and sustain employment to tackle problems for lack of jobs for the teeming populace, particularly the youth.

Obasanjo .said he decided to strike the deal with Daniel’s conference hotel on water after his intervention on the power challenges .

Obasanjo said the decision to partner with Daniel’s company was to ensure more employment is provided by both companies .

While lamenting on the situation of power in the country, Obasanjo said he was forced to abandon hydro power for solar power due to the soaring cost of hydro power .

He added that to provide water he had to create a Dam within the complex of the OOPL with a view to providing clean water to the facilities and extend it to others include conference hotel.

Obasanjo said “the capacity of the water scheme is 1.5 million that serves the OOPL facilities , the OPIC and Conference hotel .

” When the prices of diesel go up, it really became problematic, but, we must remain in the business, so, the idea of going solar came.

“I think whatever we can do is to make Abeokuta, the living and the lively place and we make Ogun state a big gateway state for development in Nigeria.

“Whatever we can do, we should always do on our part to create employment.”

Speaking with journalists after the inauguration of the project, Daniel, said what Obasanjo, had done showed how deep his heart is.

He said with the deal, one of the major challenges confronting his hotel,had been solved.

The former governor said Nigeria can solve the twin problems of power and water supply by embarking on modular projects.

He said “What China did was building of modular plants instead of struggling to building plants. We can do the same thing here in Nigeria. What Baba had done is example of what we need.

“We are lucky, God has given us what we need for this. Look at Abeokuta for example, Ogun River is there. We can build mini dams to supply some communities.Wgat we have here at OOPL, is supplying OPIC Estate Laderin and also supplying the Conference Hotel. We should embrace things like this not only in water supply but also in other areas.”.

…. We are not In Competition -Daniel

Daniel said the OOPL and conference are not competitors.

Daniel disclosed that he was the first chairman of the committee of the OOPL, describing the services being provided by the two companies as complimentary.

He said “our dream is quite big that Abeokuta, the capital of Ogun state has the central responsibility not only in the south west but, in the entire Nigeria states and that is the part of the vision baba had in putting together the initiative of the library to have a location that everybody will come and have opportunity for research and development and process that will help them for accommodation.

“What we need to do is the initiative we have here. This is not water from stream and it is not just serving the community here but, its serving other communities when you look at what the Chinese did to develop.

” It is not about building big power stations,building power supply water supply, it is about all sorts of little little modular systems.”