…Says I know, Saw The killer On Burial Day

A prime suspect in the gruesome murder of a couple,Kehinde and Bukola Fatinoye and their  son, Oreoluwa  who were assassinated  has cried out, saying, he had seen  the killer of the Fatinoyes. 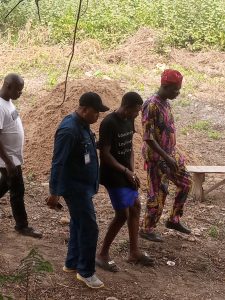 The suspect caused a stir when he was brought by the police to the scene where the remains of the son of the couple, who was thrown into the river  were  recovered from Ogun river.

While emerging  in handcuffs, the young man whose name could not be ascertained as of the time of filing this report, was taken to the river bank in Adigbe, where the decomposing body of Oreoluwa was laid few hours after the discovery .

The prime suspect while he was being returned to the custody, suddenly stopped walking and shouted that he saw one Lekan on the day the couple were being buried .

PLATFORM TIMES gathered that the suspect was a family relative who had been living with the couple who had sponsored his first degree education.

The suspect was said to have graduated from the Moshood Abiola Polytechnic, Abeokuta .

He was said to have been spared by the unknown killers who reportedly kidnapped the two of them and threw them into the river in Adigbe.on the Obada road . 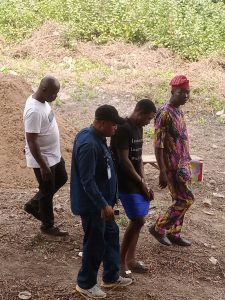 He however, miraculously survived the incident as he was reported to have swum himself out of the river after the rope with which he was tied got loosed.

While screaming, he said ” I am not a kid, I know those who wanted to kill us. I told them to hold him yesterday . They have allowed him to escape .

” I am not a kid. I know what I saw . Would I not know the person that wanted to kill us . I saw him yesterday and I said hold him . They have allowed him to escape .”

When someone among the family asked him who could the person be , he said “brother Lekan,”

There was a pin-drop silence immediately he mentioned the name. But, the Investigating Police Officer who was taking him away from the scene urged him to continue moving.

PLATFORM TIMES however, could not establish who was the Lekan mentioned.

Some people at the scene on Tuesday speculated that it could be the driver of the deceased . But, PLATFORM TIMES had yet to confirm the identity of the name mentioned .

Meanwhile, Oreoluwa’s dead body has been recovered from Ogun river.

The couple were allegedly killed by yet-to-be-identified assassins in Abeokuta, the Ogun state capital on new year’s day.

It was gathered that Oreoluwa was taken away from home after his parents were killed and burnt and was reportedly thrown into a river along the Adigbe – Obada road in Abeokuta, the state capital .

PLATFORM TIMES gathered that some fishermen were contracted by the state police command to alert them once they see any dead body in the river .

Upon seen his decomposing body floating on Tuesday on the river it was observed that, both hands of Oreoluwa were tired with rope to the back.

The fisherman, Idowu Taiwowho made the discovery, said, he discovered the body floating on the river while he was preparing for the day’s work.

He said “On Monday, we heard that someone was thrown into this river, but this morning while we were preparing for work, the police approached us and pleaded with us to inform them any time we discover the body.

“Not long after, the police came and we showed them the body after we had brought to the river bank.”

The Police later took the corpse of Oreoluwa away in the presence of the family members of the Fatinoyes.

It was learnt that, the killers had trailed the couple to their residence from their church, where they had attended the crossover service to usher in the new year.

The couple who were burnt beyond recognition were on Monday buried amidst tears by sympathisers, family and friends.