… We ‘re Getting Closed To Perpetrators- Police Source

A strong indication has emerged that the police have been making progress, getting clues to the identity of the masterminds of the assassination of a couple and their son in Abeokuta, the Ogun state capital on the New Year Day.

PLATFORM TIMES gathered that the prime suspect has been helping the police to unravel the mystery behind the gruesome murder of the couple ; Kehinde and Oluwabukola Fatinoye and their only son, Oreoluwa.

A police source who pleaded anonymity due to the sensitive nature of the matter, said the police were not leaving any stone unturned to unravel the masterminds .

A fresh finding by PLATFORM TIMES revealed that the Inspector General of Police, Usman Alkali Baba on Tuesday made phone calls, instructing the homicide section of the police to conduct an autopsy on Oreoluwa .

PLATFORM TIMES further gathered that the IGP’s call came few hours after the remains of Oreoluwa who was drowned while his hands were tied to the back by the assailants were recovered in Obada river.

Seyi Fatinoye who spoke with PLATFORM TIMES after another family meeting held at the scene of the incident , the deceased residence on Wednesday, said the body was interred beside his mother at Lantoro cemetery and not Kobape cemetery as reported by some media (Not PLATFORM TIMES) .

Seyi , a younger brother to the late father of Oreoluwa said the earlier plan was to bury the 26-year-old Oreoluwa at Kobape cemetery where his younger brother Oluwatunmise was buried last year June, but, the plan changed .

He said the body was interred at Lantoro cemetery beside his mother after the authority of Kobape cemetery had closed the gate to the cemetery .

Meanwhile, the family after the meeting held on Wednesday decided to evacuate the cars and other valuables in the house to avoid them being looted by hoodlums.

The family of the couple has protested against some reports described as fake on the deceased who were killed and set ablaze after they returned from crossover to new year .

A family members, simply identified as Bajela has condemned some reports claiming that the couple’s son head was severed .

Bajela , a family member of Bukola Fatinoye, said the report was almost led to the death of their head of the family who was devastated by the reports about the couple .

According to Bajela , our family has become the subject of discussion by the people . They were all sorts of things that are not true .

“I cannot walk about Abeokuta . Everywhere I got to, I observed that many people are saying unprintable things about the deceased .

“Imagine, some were saying, they (the couple) did ritual money . They said that they used their son.” 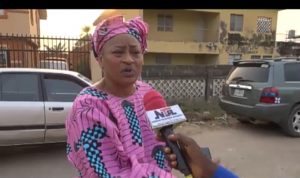 Mrs. Modupeola Sumonu, the Chairperson of the community where the incident happened, said that, upon seeing the fire outbreak , the residents trooped out and made several atrltempts to put out the fire .

Sumonu said “it was a fire that started and somebody came to wake everybody up. There was a lot of fire. We stood there then we called the federal and state fire services and they responded and put the fire off.

“We didn’t know anyone was inside the house because a car was missing from their cars so by the time the fire services opened the gates we found the car there.

“So, we thought maybe they are not back from watching the night service. It was when they put off the fire they discovered the bodies inside the house. It is a very sad thing.”

Four Days after a couple, Kehinde and Bukola Fatinoye and their son were killed by unknown assassin on January 1st, 2023,the state Governor, Dapo Abiodun has broken his silence .

Abiodun in his statement on Wednesday gave a marching order to the police command in the state, to go after the killers of the family .

Abiodun in a statement by his Chief Press Secretary, Kunle Somorin, on Wednesday, declared that the killers who equally kidnapped the couple’s son and threw him inside the river, would not go unpunished, hence, the police must go after them and apprehend them.

He described the incident as unfortunate and heart-breaking, vowing that his administration would not hesitate to deploy resources with the view of unmasking persons behind the dastard act.

The governor noted that the incident shocked him, particularly when efforts had been geared by his administration towards strengthening the security architecture within the state, stressing that no effort would be spared in bringing the perpetrators of the heinous crime to book.

While expressing his sympathy to the families of the deceased, Abiodun assured them that the murder would be unravelled and persons responsible would be brought to justice.

He stated that further logistic support would be rendered to the police to ensure that the crime does not go down as one of the unresolved murder incident in history.

While assuring the people of the state that his administration would continue to do everything to provide adequate security of both lives and property, the governor reiterated that Ogun would not never be a safe haven for criminals.

“My heart goes out to the families of Kehinde and Bukola Fatinoye. The incident indeed shocked me, as it was unfortunate and tragic. I can imagine the pains the families would be going through at this period when everyone is still basking in euphoria of the New Year.

“This is a grievous crime, no doubt. I have directed the Commissioner of Police to ensure that everything is done in order to arrest the people behind the dastard act. I assure you that the perpetrators will not go unpunished. Such an heinous crime should not go without making the people responsible face the full wrath of the law.

“Though, our administration had since strengthened the security architecture in the state, we shall continue to provide logistics to the security agencies in order to make our state the safest to live, work and play. Let me reiterate that no effort will be spared to ensure security of lives and property of our people”, the governor was quoted to have said in the statement.