The hope of motorists and commuters plying the Abeokuta-Sango-Lagos Road in Ogun state has been tragedically dashed as the governor of the state, Dapo Abiodun, says, reconstruction of the road would be completed in 2024, a year after his first tenure . 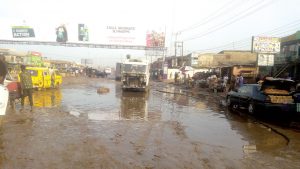 Abiodun said the Abeokuta-Ifo-Ota-Lagos Road would wear a new look in the next 18 months .

PLATFORM TIMES observed that the new date is dicey except that the governor is re elected by the people of the state in the coming election.

PLATFORM TIMES also observed that Abiodun’s failure to get his second term may dash the hope of thousands of the motorists and commuters who go through harrowing pains while plying the road, owned by the federal government.

PLATFORM TIMES recalled that on August 4, 2022, the State Government had promised the people of the state that the reconstruction of the Sango-Ota road on the Lagos-Abeokuta expressway would be completed by December.

The government had also said that the state executive council had approved the reconstruction of 32km Ijoko/Sango/Agbado road.

Breaking the news to the people on Tuesday, Abiodun said his administration which would have completed his first term in May 2023, said would complete it in 2024.

Placating the people ,Abiodun made another round of promise ,saying, agreement would soon be reached with the Federal Government to reconstruct the road.

He said this while inaugurating the Itori Township Road in Ewekoro Local Government Area of the state.

He declared that his administration would fix major roads that are in a deplorable condition.

The governor said ” the reconstruction of the road was in fulfilment of the promise made during 2019 campaign, the essence of government is to serve the people.

“My administration remained the first to ensure equal distribution of projects to all parts of the state, no local government has been left out in project execution.”

Tinubu Healthy, Every Nigerian Above 40 Is Sick – Orji Kalu