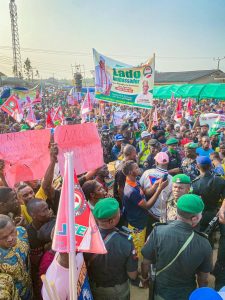 Adebutu, during his campaign event in Abigi, the headquarters of the council said, he donated the transformer as a token of his dedication to addressing the area’s almost three-year-old power supply problem.

According to him, it is best to grow a country from the bottom up, as he stressed that, if elected governor in the general elections in 2023, his administration will support and offer local governments financial autonomy. 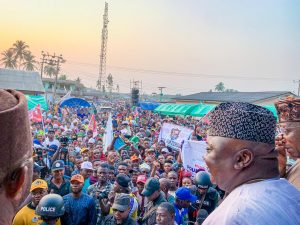 In the same vein, he pledged to build a bridge that will link the state’s Ogun Waterside Local Government Area with neighbouring Lagos State.

According to Adebutu, the connection to Lagos will draw investors, particularly from the private sector, and accelerate the growth of the local government in particular and the state overall, explaining that the City and the Local Government are divided only by water.

Additionally, he pledged to supply the local government’s farmers with the tools they need to support the area’s primary industries of agriculture and fisheries.

However, he emphasized that over 400,000 voter’s cards have not yet been collected in the state, according to the Independent National Electoral Commission, and asked the populace to obtain their permanent voter’s cards and wisely use their electoral authority (INEC).

Balogun Iyanuoluwa, a JSS2 kid who came to the event with his parents, received a donation of N500,000 from the PDP governorship standard bearer at the event as support for his education and a promise of an open, responsible government.

Speaking at the event, the State PDP Chairman, Hon. Sikirulai Ogundele, welcomed new party members during the campaign who had left the African Democratic Congress (ADC), which was led by Elder Tade Bello, a former local government chairman.

Ogundele advised people in Iwopin, Ibiade, Abigi, and other local government communities as well as those in the rest of the State to vote for PDP in all of the upcoming elections.

He emphasized the need of supporting PDP candidates at all levels of government, saying that doing so will result in a straightforward, trouble-free administration.

Yeye Adenike Adebutu, the wife of the candidate for governor, was also present on the campaign train, which came to an end at Abigi town.

She expressed gratitude to the residents of Ogun Waterside Local Government for their unwavering support and prayers.

She urged the council members to vote out the state’s current administration, which she claimed had caused suffering for the populace.