The Federation of Muslim Women Association In Nigeria (FOMWAN), Ogun state chapter, has commiserated with Muslims over the death of their beloved in a car explosion around the Odogbolu junction along the Sagamu/Benin expressway in Ijebu-Ode axis of Ogun State. 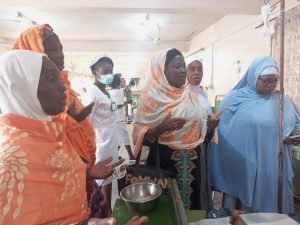 The group, during a visit to one of the survivors at the Federal Medical Center, Abeokuta, on Monday, urged families of all those who have lost their loved ones in the tragedy to take solace in the comfort of God.

The National Secretary of FOMWAN, Dr. Monsurat Musa said the news of the incident came as a shock, adding that it is the will of Allah.

Dr. Musa said, “the news of the accident came as a shock to everyone because even though we are all Muslims and we pray to Allah for life at all times but at the same time as Muslims, we have been made to understand that Allah’s will and wish can come at any time to any individual.

“And as Muslims, we have accepted it as faith and as a way of Allah testing how prepared we are for the last day which can come at any time.

“The prayer has always been for Allah to give ye the grace to behold and practice Islam till eternity.

“But as it has come now for those that have gone, we pray to Allah to give them the rewarding reward which is Aljanat.

“And for those in the hospitals receiving treatment, we are sincerely praying to Allah to make the healing a fast one and make it renew their faith. Our faith has never been shaken at any point in time.”

On her part, the state Ameerah of FOWA, Ogun state chapter, Alhaja Zainab Iyabode assured that the association will continue to give moral, financial, and spiritual support to the victims.

Iyabode, who noted that the incident was tragedies said, “we will always continue to pray for the deceased for Allah to give them perfect rest and those alive, quickly recovering.”

Recall, PLATFORM TIMES had reported that no fewer than seven people lost their lives while seven others sustained the severe injury during the explosion.

PLATFORM TIMES gathered that the accident occurred when a 15-passenger Mazda bus with registration number AGL 886 YD suddenly burst into flames due to engine oil overflow along the highway.

While seven persons were burnt beyond recognition at the scene of the incident, seven other victims who sustained varying degrees of injury were rushed to the general hospital, Ijebu-Ode for treatment.

Confirming the incident, the Public Relations Officer of the Traffic Compliance and Endorsement Corps, Babatunde Akinbiyi, said the accident occurred at about 02: 50 pm on Wednesday.

He said, “according to eyewitness accounts, the lone fatal crash was coming from Kosofe area of Lagos inbound Epe, for a church revival to use in the new year when its engine suddenly caught fire due to engine overflow.

“The number of passengers in the commercial bus was 15, out of which seven females were burnt to death, while the remaining seven were seriously burnt and taken to Ijebu-Ode General Hospital for treatment. However, the driver of the bus escaped.”

2023 Election: Bandits, Foreigners Are Two Steps Ahead Of Us, Says Immigration CG