A non-profit organisation, Wellness Africa Foundation (WAF) has warned that men who indulge in hard drugs are liable to suffer ill sexual health. 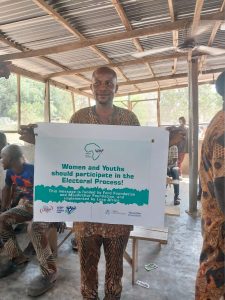 The Foundation’s Programme Director Dr. Omotola Akinmolayan, emphasized the need for men to avoid the use of different concoctions, hard drugs, and substances that could later have adverse effects on some of their internal organs.

The Director, during the foundation’s sensitization campaign at Mechanic Village Abule-Nla, Abeokuta, Ogun State to engage Mechanics and other skilled professionals in the automobile industry warned that the implications of such are weak erection, low sperm volume and erectile dysfunction in men.

The theme of the programme which was funded by Ford Foundation, MacArthur Foundation and implemented by Leap Africa was: ‘Men’s Sexual Health and Civic Participation’.

Akinmolayan said “Men should avoid the use of different concoctions, hard drugs, and substances that could later have adverse effect on some of their internal organs like kidney, liver, and eventually detrimental to their sexual health- for instance, weak erection, low sperm volume and/or motility, erectile dysfunction among others.

She also spoke on the need for men to engage in regular medical blood pressure check.

Akinmolayan while addressing the audience, equally stressed on the need for them to take care of their bodies, especially after strenuous work.

Meanwhile, a Programme Associate at WAF, Ayomide Ajewole advised the Artisans to endeavour to collect their Permanent Voters Cards (PVCs) in order not to be disenfranchised from participating in the forthcoming elections.

She also charged them to shun electoral malpractice and violence, as well as vote buying.

Another Programme Associate, Alabi Esther spoke to the audience on the need to allow their wives and children to participate in the electoral process.

She also stressed the need to encourage People Living with Disabilities (PLWDs) to participate in the process adding that disability does not stop them from participating in the election.