… How Abiodun Intervened In The Educational Sector

Despite the increasing number of school enrollment in Ogun State to almost two million (1, 707, 580 in 2022), the Gateway state still ranked high in the number of out-of-school children in South-West Nigeria. 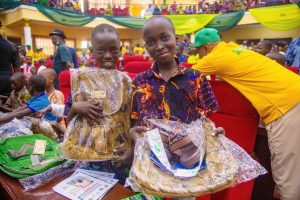 The Federal Government, through the Honourable Minister of State for Education, Goodluck Nanah, expressed disatisfaction at the persistent increase in the number of out of school children in the country.

Noting that Ogun State, has a high number of out-of-school children, therefore, calling for the immediate intervention of the state government in the provision and support for basic education in the state. 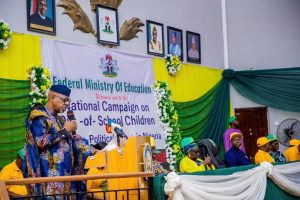 “These children are found on the streets hawking, begging, some as house girls without any skill and some in the farms during school hours. 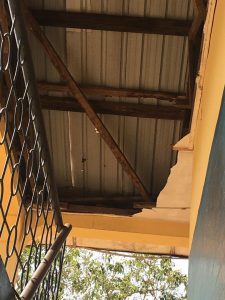 “It is therefore necessary for us to address this challenge adequately and this calls for strengthening the quality of basic education in the state by confronting head-on those factors that deny our children access to Basic Education.

“This is why the sensitization programme is designed to ensure enrolment of all school age children in school and this effort should be taken seriously by all stakeholders.” He submitted. 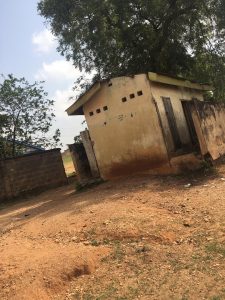 Corroborating this fact of figure, PLATFORM TIMES reports an interview with the State Universal Basic Education Board Chairman in December 2022, Ogun State, where he disclosed that Ogun State has a number of 700,000 out-of-school children.

PLATFORM TIMES gathered that the 700,000 was part of the 10 million out-of-school children in the country .

Recent statistics showed that with North Western states gulping the largest percentage of 3,490,670 of the whole total, followed by the Northeast with 2,001,038 and Southwest with 1,459,739 while the other three geo-political zones sharing the number. 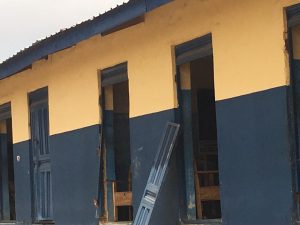 Hence, Ogun State has the largest share of the south Western states with over 700,000 out-of-school children.

However, according to recent statistics by United Nations Educational, Scientific, and Cultural Organisation (INESCO), the current out-of-school children population in Nigeria exceeds 20 million.

Meanwhile the state Governor, Dapo Abiodun who assumed office in 2019 stated that the increasing number of school enrolment is an indicator of success in the fight against out-of-school children menace in the state.

Abiodun who spoke at the event ,said
that 1,707,580 students have been enrolled into the schools, while various other intervening efforts to forestall the rising number of out-of-school children.

He said, “I am happy to report that our investments in the Education Sector continue to yield a bountiful harvest. For Example, in the area of enrolment and out-of-school children which is the target of this programme, total enrolment in our school was 1,446,522 as of 2019.

The Minister of States for Education who appreciated Governor Abiodun for his efforts towards Education in the state, however appealed to him to address the issue of shortage of teachers.

He said, “I wish to once again appreciate and commend the efforts of the Executive Governor of Ogun State and appeal to him to continue to prioritize education in the state budget for more impact and address the issue of shortage of teachers.

“I sincerely appeal to all States Governors to make substantive efforts to ensure increased access, improve quality and systems strengthening of education at all levels in the states.

The Minister furthered called for gainful engagement of the teaming children, saying, it would curtail vices in the society.

He urged parents, religious and Community leaders to join hands with the government to engender development through education.

“Gainful engagement of our teeming children and youth will lead to a peaceful environment and curtail vices and crimes in the society.

“I also appeal to our traditional, religious and community leaders as well as all parents to join in this campaign to substantially reduce and hopefully eradicate the Out-of-School-Children phenomenon in Nigeria.” He submitted.

PLATFORM TIMES Investigation revealed that the Ogun State educational sector is infested with crowded classes , thereby, leading to congestion of students in classrooms.

PLATFORM TIMES further gathered that in another school , a minimum of 60 students are attached to a teacher as against the 40:1 student-teacher standard as given by the National Policy on Education.

Research has also shown that the teacher-student ratio may lead to under-utilization or over-utilisation of teachers.

According to Wikipedia, the student-teacher ratio is the number of students who attend a school divided by the number of teachers in the school.

According to the National Policy on Education, which stipulates that the teacher-pupil ratio should be 1:40. However, the ratio is exceeded in most schools, especially in urban areas.

In addition, the teacher-pupil ratio varies from a minimum of 1:21 (states of kwara and Anambra) to a maximum of 1:73 (state of Yobe).

In Ogun State however, PLATFORM TIMES INVESTIGATION revealed that they are twice the basic standard ratio.

Lamenting the condition of classrooms in the school, Mr Gbenu said that the school has over 120 students attached to a teacher in a classroom, while acknowledging that the standard ratio should be at most 50-1.

“There has been a shortage of teachers due to employment of teachers since the Ibikunle Amosun’s government and the current administration of Abiodun too. I am in Ogun State and I can speak for the situation here.

“In a standard school, the student-teacher ratio should be at 50:1. In my school, you will find over 120 students attached to a teacher because we combine two classes together.” He said.

A staff of the Abeokuta Girls Grammar School who spoke with PLATFORM TIMES on the condition of anonymity, disclosed that the number of students attached to a teacher in the school is at 60:1.

In another development, a source from the Methodist Primary School, Igbo Ori, Ayetoro, told this reporter that there are 50 students attached to a single teacher in a classroom.

According to the source, who pleaded anonymously, “in a normal school, the student-teacher ratio should be at 20:1, however, the case is different here. There are over 50 students in my classroom”.

It is no gains saying that a conducive learning environment plays a pivotal role in the student learning process.

Hence, the learning environment, school buildings, facilities and basic learning materials are crucial to the transference of knowledge.

The situation of facilities in some Ogun State schools have been reportedly below percentage in recent times.

In this phase of PLATFORM TIMES REPORT, schools were visited to uncover the siege of dilapidated facilities bedeviling the educational sector.

In this reporter’s visit to some schools, he was exposed to falling ceilings, decemented floors, broken glass windows, broken class seats and desks, amongst others.

A Principal, while noting the current situation of education in the school stated that some classroom ceiling roofs are broken and need repair.

She added that some cemented floors have become decemented while some windows and doors are falling off.

The principal also noted that the school is in need of more classrooms to accommodate more students.

She said, “some of our roofs are falling off, you will see them when you go outside. You will see the doors and windows too. The cemented floors too are weak and it’s causing dust in the classes.

“Why I am clamoring for more classrooms is that, if we have more classrooms, we will be able to have more students, because it is the amount of classrooms we have that the commissioner will use to give us students.” she submitted.

The PTA Chairman added that the school currently suffers from insufficient facilities to properly accommodate the population of students per classrooms.

He disclosed that students receive lectures on bare floors in the school as a result of over overpopulation of students in the classes.

He added that as a result, students seat on the bare floor while receiving lectures.

“Another problem we are facing in the school is that there are no seats for the students. Although the government is trying in other aspects, there has not been provision for seats.”

The PTA Chairman added that over 90 percent of schools in the local government lack proper government welfare and development efforts, as the overpopulated schools derail in basic educational facilities and amenities.

“There are over 90 government owned schools in Ipokia Local Government Area, but sadly, about just 5 of them do not have the building and facility problem.”

“Many of the primary schools in Idiroko and environs have over 700 students, and they suffer the same fate of dilapidated facilities, the case is not different in some senior schools.” Mr Gbenu lamented.

…How Abiodun Intervened In The Educational Sector

Governor Abiodun, since the commencement of his administration has embarked on several intervening efforts to rescue the downtrodden educational sector.

According to the Governor’s speech at the out-of-school children flag-off campaign, his administration has intervened in terms of rehabilitation and reconstruction of classrooms and schools, facilities, employment and other areas lagging in the sector.

“The process of supplying twenty-five thousand furniture to all primary and secondary schools for the use of our learners to cushion the effects of acute shortage of furniture in our Schools.

“This process is still ongoing; Rehabilitation of over 956 classrooms in our Primary and Secondary Schools across the state; Upgrading 42 of our Secondary Schools to Flagship Schools for better performance and productivity;

“Commencement of Ogun Digitalized Multimedia Lesson Plan where the teachers would be equipped with the resources for effective delivery; Working in collaboration with a non-profit organisation; we have integrated 100 Fellows into the Teach-for-Nigeria Programme;

”Introduction of OgunTEACh intervention programme which is employing five thousand interns to fill the teacher-vacancies in Primary, Secondary and Technical Colleges, the largest bulk employment of teachers in the history of the state.

“The clearing of the backlog of promotions of 2016, 2017, and also the promotion of teachers due in 2019 and 2020. Introduction of e-Dossier (electronic report sheet) as well as Learner Identification Number (LIN) for all learners in our schools. (We are the first to introduce such in Nigeria) Payment of Bursary to Ogun State Indigenes in Nigerian Tertiary Institutions.” Abiodun listed.

….No Rural Allowances For Rural Teachers

The interface of rural allowances for rural teachers has been swept under the carpet for some time now in Ogun State, leading to teachers’ lobby for transfer to urban areas,PLATFORM TIMES can report .

It has been argued over time that the posting of teachers to rural communities is to serve as a form of punishment considering the neglect and poor welfare in which the teachers are often subjected to.l in the rural communities.

PLATFORM TIMES gathered that the poor welfare and remuneration for teachers in the rural communities demoralise and lead to lack of motivation.

One of the reasons for the shortage of teachers in the rural areas, it was gathered , boils down to the removal of rural allowances for the rural teachers, an adverse effect of which affects student-teacher ratio.

Speaking with PLATFORM TIMES, the Principal of Abeokuta Girls Grammar School (AGGS), Mrs. Yerunde Obasan urged the state government to reintroduce the interface in order to encourage the teachers to stay and discharge their duties efficiently when posted to the rural communities.

“They may not be enough yet, but many teachers don’t want to stay in the rural area. I think what the government can do is to motivate them by giving rural allowance to teachers that are sent to rural areas.

“The teachers are getting their allowances here in the urban areas, however, when they are sent to rural areas, they should be given rural allowances too, life and education there is very different from the way it is here,” she said.