Seven months after the presidential candidate of the All Progressives Congress, Bola Tinubu caused a stir with Emilokan mantra in Abeokuta,Ogun state capital, the candidate has stirred another controversy on Fuel scarcity and naira redesign. 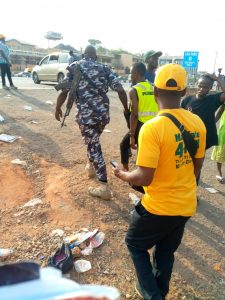 Tinubu had on June 3, 2022 in Abeokuta ahead of the party’s primaries, caused a serious stir with his statement of entitlement “EMILOKAN” which went viral and eventually became adopted word by many Nigerians .

As the dust raised over that was settling, Tinubu caused another big controversy when he raised the alarm that there was grand plan by some people he described as saboteurs of planning to detail the coming elections through fuel scarcity and naira redesign. 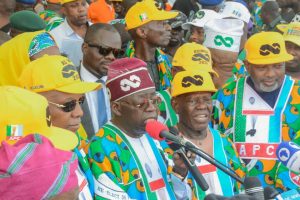 Addressing a very large crowd during the presidential campaign of the APC held at the MKO Abiola International Stadium in Abeokuta, Tinubu said the fuel crisis and naira redesign were orchestrated by his political traducers to stop his emergence .

Meanwhile, some supporters of the Party’s Presidential candidate, who thronged the venue for the APC presidential rally to show their support were left wounded while one other collapsed . 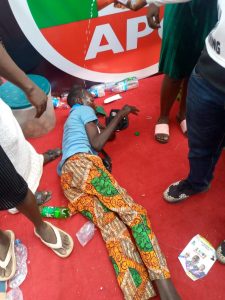 PLATFORM TIMES observed that there was congestion of the venue which almost caused a stampede .

PLATFORM TIMES observed that some supporters sustained various degrees of injury while some were trampled on as they scrampled for food.

Some of the supporters rushed after a campaign vehicle carrying cooked food and shattered the windscreen to gain access to the food while the vehicle was in motion. 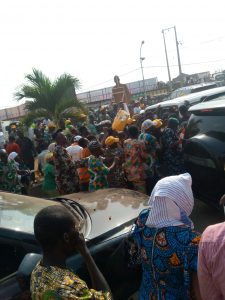 Angry crowd destroyed the windscreen of the vehicle after the driver refused to stop for them.

The vehicle was loaded with packs of food in branded package, but, their failure to get their package provoked them to descend on the vehicle .

Some of the angry supporters while sharing their ordeal with PLATFORM TIMES said they had been under the sun without a bottle of water . 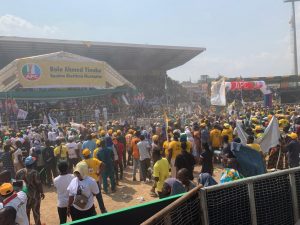 They said that they felt more pained when the vehicle which carried food decided to play pranks on them.

…. Charms On Display At Rally

The campaign was however turned to a show of display of assorted charms by some supporters of the party. 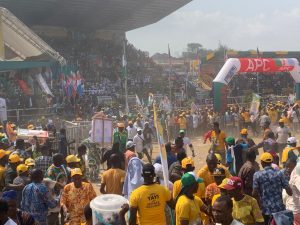 PLATFORM TIMES observed that some hoodlums and students clashed which almost truncate the peaceful rally.

As soon as the clash broke out , many supporters scampered for safety, but, .was quickly brought under control .

Also a yet-to-be-identified boy, collapsed while

The victims, was however, revived by well-wishers who poured water on him.

Tinubu, however, threw his support behind the state governor,Dapo Abiodun ,saying, Abiodun would be victorious in his second term governorship ambition. 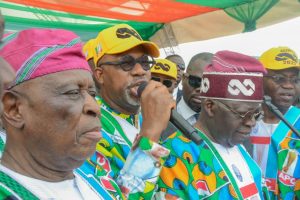 He said, “Do not worry, your second term is assured.”

Tinubu assured Nigerians that his administration will provide loans to students to regulate school dropouts, adding that he will regulate fuel subsidies currently posing threat to the country.

According to Tinubu, this election is a revolution and they want to wear their cap on their buttons. They are lying. They talk about inflating the fuel price but put your mind at rest, we will reduce it.

“They don’t want this election to take place, they want to disrupt it but will we agree? No.

“After this, I guarantee you one thing, there will be student loans, and nobody will drop out of university because of school fees. Nobody will have to repeat one class for eight years and not graduate.

“There will be a student loan, nobody will drop out of university because of school fees, I guarantee you that.

Supporters of former governor of the state, Senator Ibikunle Amosun went into jubilation shortly after the rally over the failure of Tinubu to raise Abiodun’s hand during the rally. 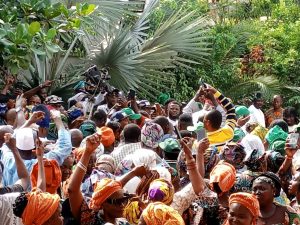 PLATFORM TIMES gathered that the supporters who were members of the
African Democratic Congress expressed happiness that Tinubu did not support the second term of Abiodun .

However , a shock was received when Tinubu publicly threw his support to Abiodun when he said that the governor’s second term is guaranteed . 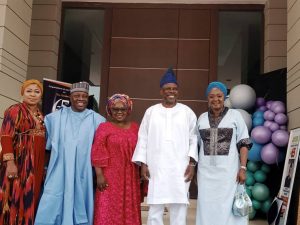 A leader of the party has lost his car after the campaign rally .

The car was reported to have been parked around legislative quarter during the rally was reportedly taken away by unknown people .